Kaari Vasquez was drawn to the home as soon as she saw a picture of it. Maybe it was a fluke or a coincidence the house was on Kari Ann Drive, but the similarity to her own name caught her attention.

Kaari (pronounced Car-ee) dragged her sons David and Anthony to an open house “just to see it and we walked through and just absolutely fell in love. The boys were excited.” She rushed home and told Lee, her husband, he had to see the house.

But the price was too high for them. Then they started praying.

After submitting an offer below the owners’ asking price, they decided to write a letter explaining their desire to use the home to serve foster children through Buckner. 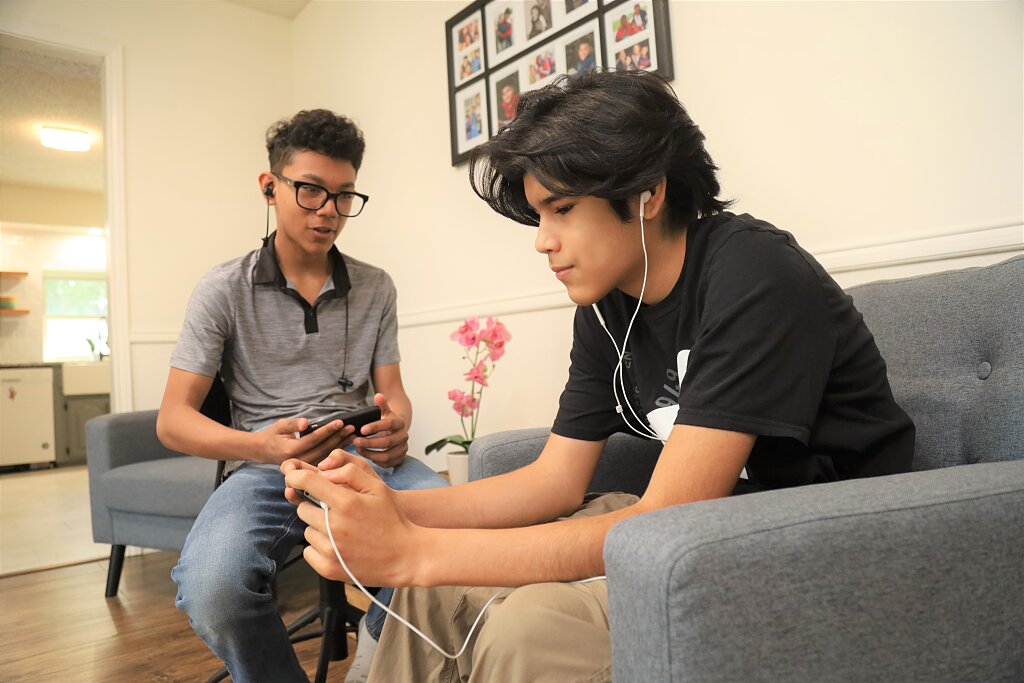 “We wanted to explain why we made a low offer. We didn’t want to be rude,” Kaari added. “We could just picture our family in this home and we told them [owners] how we desired to use it. We’d love to foster siblings and your home would give us the room to do that.’”

When their realtor called to say their offer was accepted over a higher one, they were "blown away.” And then they learned more. The family selling the house had been a foster family and used the home just as the Vasquezes imagined using it. Their letter hit the spot.

When God calls you to foster care, he works out the details

Lee and Kaari started their journey as foster parents 13 years ago in Virginia while living in a one-bedroom apartment. The call came for them to care for a brother and sister. But when the children showed up, it was two boys. 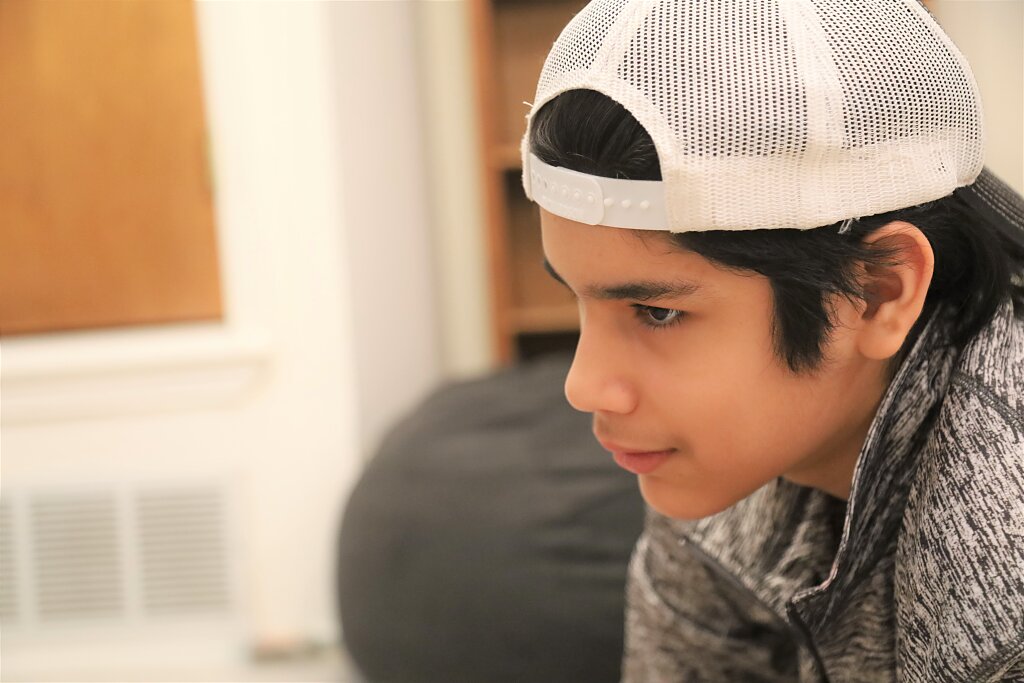 The youngest was a three-month-old named David, who stayed with the Vasquezes, while the 6-year-old went to live with another family. Thirteen years later, David is still with them, but not as a foster child. They adopted him.

Their youngest son, Anthony, came soon after. His mother had aged out of foster care and was headed to jail. Initially, the plan was to keep Anthony as a foster placement for a year. Lee and Kaari agreed they wanted Anthony to maintain a relationship with his birthmother, so they visited her in jail with Anthony in tow.

“That was a very difficult time,” Kaari said, “but God really used that to help her see that we loved her and we cared about her.”

Kaari, a speech pathologist, had just start working full time again and was overwhelmed with two small boys along with her work.

“God made it very clear what he wanted me to do,” she said. 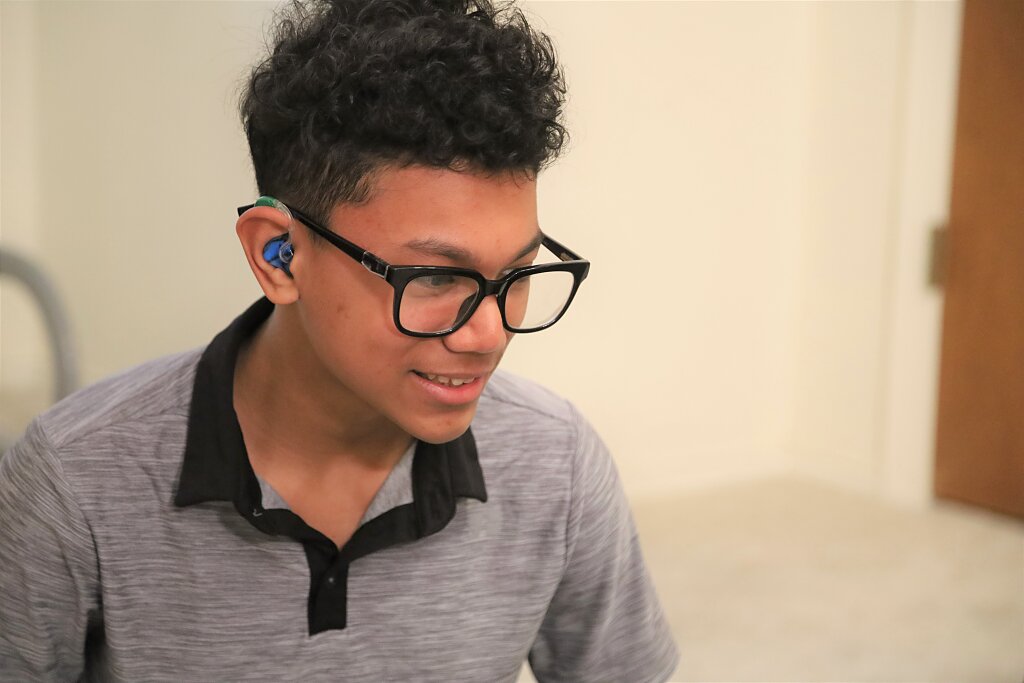 She told her boss about Anthony and that she needed to bring him with her to the school where she was working, so the school opened a spot for him.

Lee, an engineer with UPS, was traveling regularly for work then and Kaari was nearing a breaking point.

“I found myself in my laundry room crying and just asking God why. I wanted to be home and I thought it would be better for Anthony. At that moment, God gave me peace and I was just thankful for all that he had provided.”

The day after her laundry-room breakdown, Anthony was diagnosed with hearing loss.

“So, here he was in one of the country’s best schools for children with hearing loss. Had I not been working full time there, he would not have been diagnosed as quickly.”

Co-workers approached her and said things like, “Wow. What are the chances that this child was placed with you and now he has a hearing loss? I don’t believe in God, but that makes me wonder.”

Foster care involves the whole family, not just the child 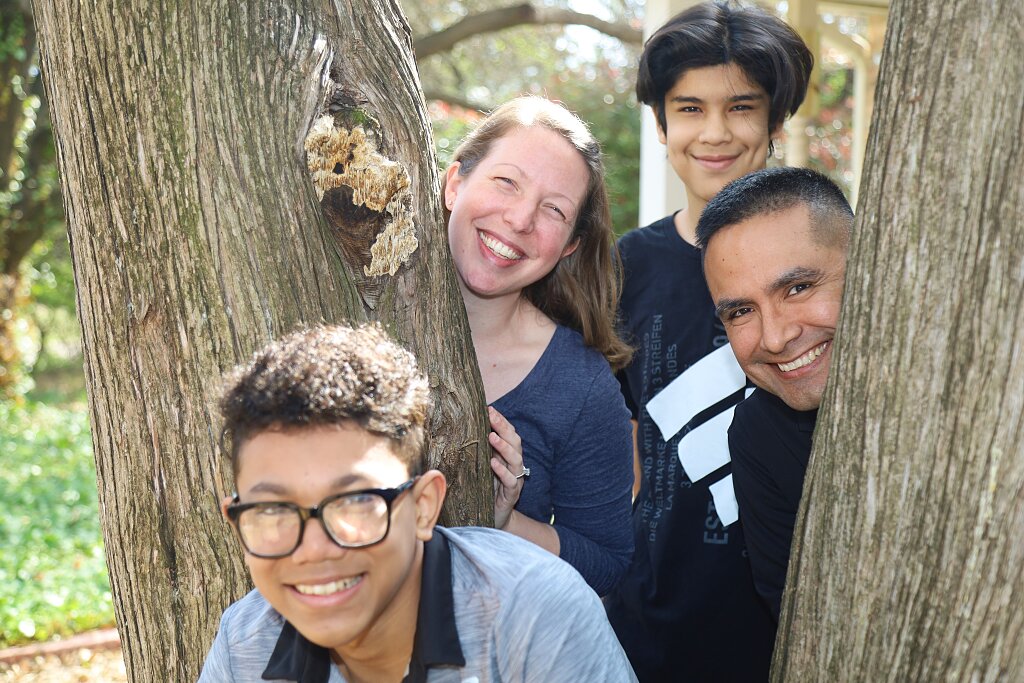 The irony of Kaari and Lee adopting two foster boys isn’t lost on them. Their motivation for becoming foster parents in the first place was to reunify foster children with their biological families, while taking opportunities to serve the families along the way.

“It’s not just the child you’re bringing in, you’re going to be alongside the family, or the parent, who is trying to get their child back,” Lee said.

“Sometimes it (our calling) has looked like children being reunited with their birth families,” Kaari added. “But truly, the most powerful and important piece to that calling and what we’ve seen over these years is the healing that comes from them accepting Christ, learning about who Jesus is, and being restored to him.”

Lee believes God has a plan for every family they serve through foster care. That plan “is for individuals, for families who are going through a tough time to see salvation at the end of their suffering. We have to trust that God is going to bring them back together.” 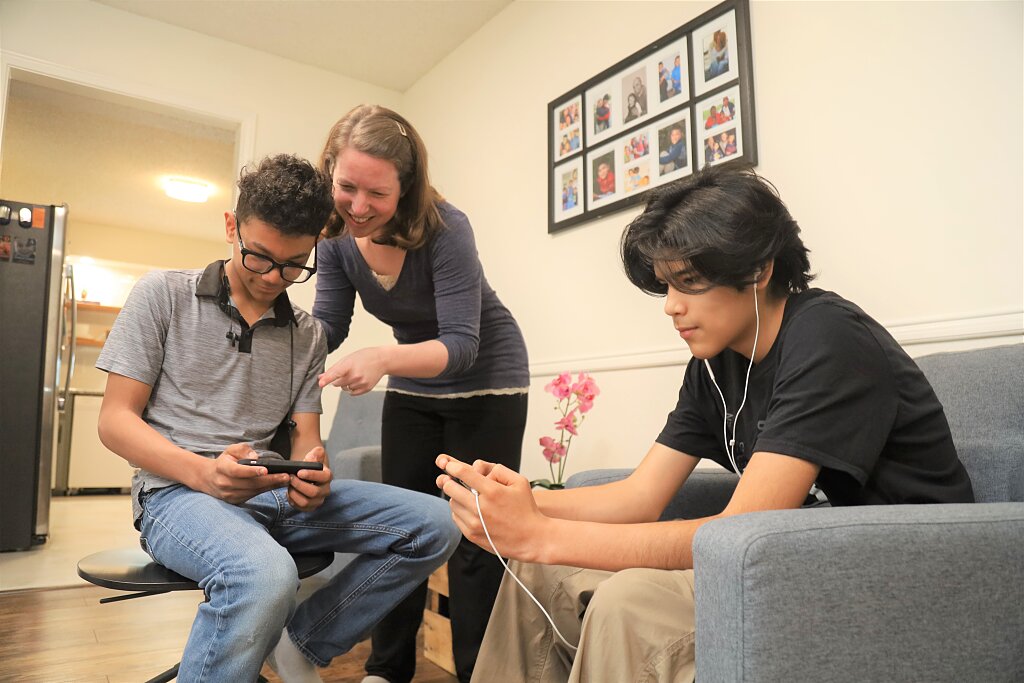 As a result of getting to know the families, Kaari said their own family has grown exponentially because they now have “extended” family everywhere they’ve lived, including two years they served at an orphanage in Baja, Mexico.

“The Vasquez family has felt the pain and grief that comes with loving so deeply,” said Andi Harrison, regional director of foster care and adoption for Buckner. “I am very thankful that we are able to offer our families the counseling to find healing through their journey. The counseling that we are providing families like the Vasquezes extends longevity in this ministry as families receive the support from their organization.”

“The Vasquez family continues to respond to the gospel by saying yes to caring for children through foster care, but they take it one step further by showing love and respect to each of the birth parents,” Harrison added. 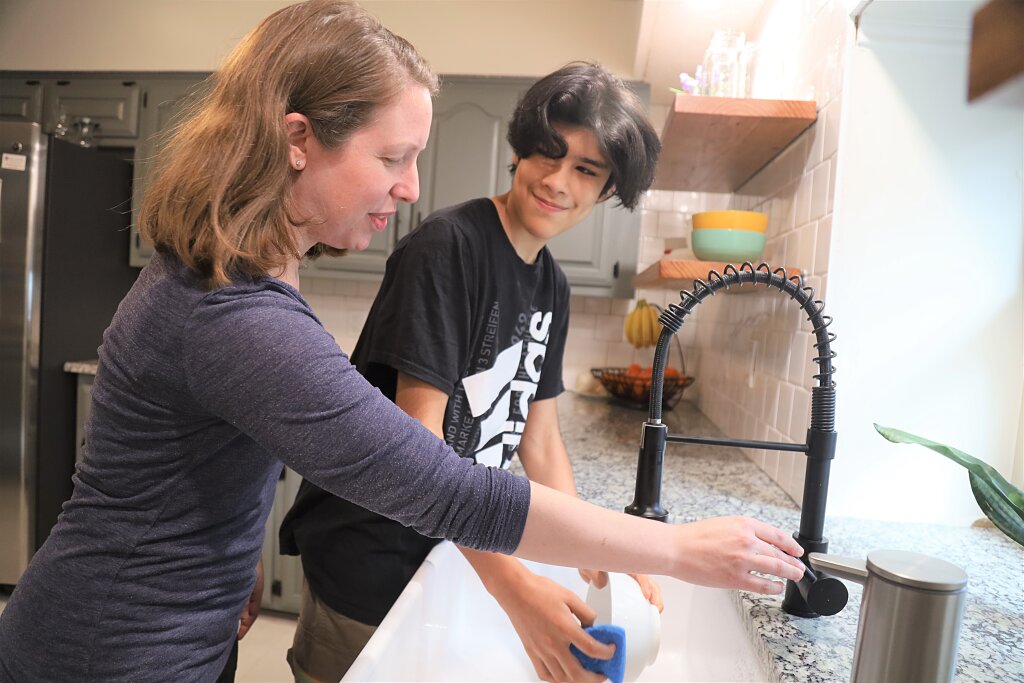 The need for foster care is everywhere

After finishing their stint at the orphanage, the Vasquezes needed to decide where they would live back in the U.S. Kaari researched states needing foster families, especially ones that speak Spanish, and found Texas. As they zeroed in on the state, they contacted Buckner and were told Dallas-Fort Worth had a high need for what they had to offer.

“We knew of Buckner because of some friends at our church in Virginia,” Kaari said. A good friend from the church knew Buckner President and CEO Albert Reyes and recommended they check out the Dallas-based ministry.

“We researched and we really connected with the mission and the vision that Buckner had,” Kaari said. “I called Buckner up before we moved here and asked where the greatest need was for foster parents.”

They chose Texas and the Dallas-Fort Worth area because of Buckner.

“One thing that set Buckner apart from other agencies was the support they offer our family,” Lee said. “Not just the kids that come in to stay with us for a short while, but David and Anthony also get to benefit from therapy through Buckner and us as a family. We’ve worked through some things that are difficult.”

“Whether or not a child is able to reunify, we see the big picture,” Kaari said. “God’s ultimate plan is for us to be able to share his love with others and pray and desire for them to experience that for themselves and ultimately come to know Christ.”

And while their mission is reunifying children, that also means suffering losses along the way. It was that fear of seeing children come and go that caused Lee to hesitate at first.

“I thought, why would we get into foster care? It seemed like something very difficult, an emotional roller coaster,” he said. “If you take in a child, you fall in love with the child, and then you have to give up the child. Why would I do that to myself on purpose?” 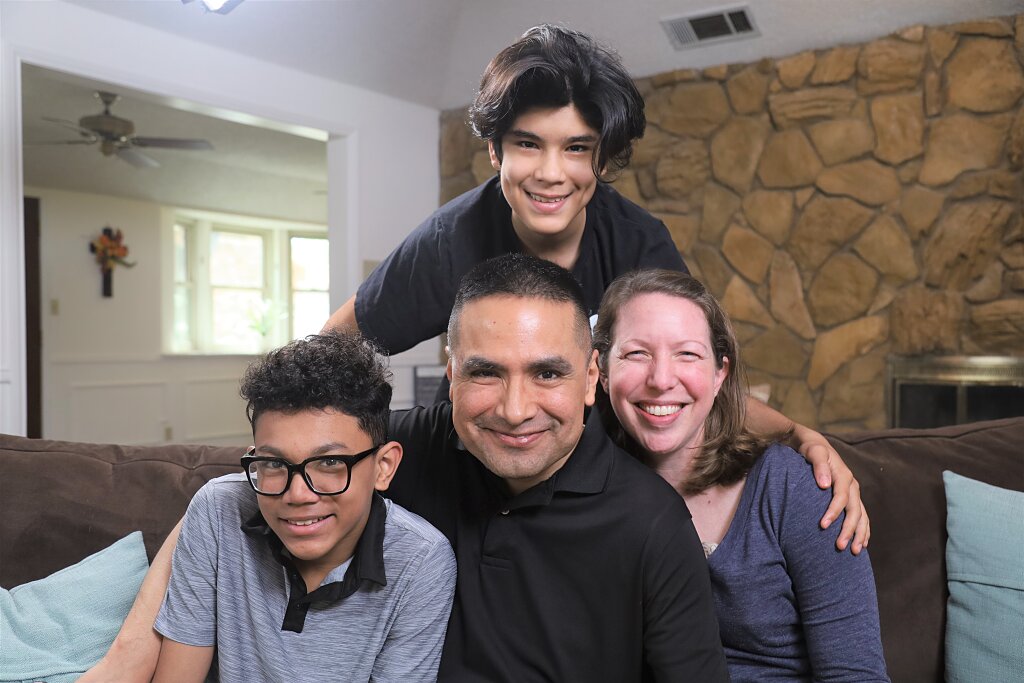 “I think the hardest part of this – of doing foster care – is also one of the most important lessons that we’ve learned and that is to be able to trust God with all our children,” Kaari said. “To able to trust that even when the situation is something that we feel is not best for the child or we feel frustrated with or that we’re questioning, it’s trusting that God has good plans for that boy or girl and that he loves them more than we ever could.”

Reunification has no bigger advocates and fans than Kaari and Lee because they know children belong with the families God put them if possible. So, they deal with the goodbyes and pray.

“I always say that the day it becomes easy to say goodbye is the day we should quit,” Kaari said. “Because, really, the children deserve us to become attached to them, to fall in love with them, to love them as our own. They deserve that. They deserve nothing less. And if we were to give them less, it would hurt less.”