“I wonder whatever happened to that wood cross,” mused Alan to his visiting children and grandchildren.

Earlier in the summer, Alan, 58, had a heart-attack. Faced with mortality for the first time, Alan reminisced about important moments in his life. With his children gathered around him, he told stories about growing up in the Rio Grande Valley in South Texas and about the death of his parents.

But it was the story of helping create a giant wooden cross that stuck with his daughter-in-law, Jillian.

Finding love and support at the Children's Home

Alan is one of seven siblings – four boys and three girls. In the mid-1960s, Alan's father passed away from a stroke shortly after his youngest brother was born. His mother was diagnosed with cancer during this time.

Knowing her cancer was terminal, she made the difficult decision to send the children to the Rio Grande Children’s Home in 1968, the only place where her seven children could stay together. She passed away five days after her children were placed at the Children's Home.

The Rio Grande Children’s Home opened in 1964. Born out of the heart of Pastor Buddy Owens, the ministry began as on-campus housing for vulnerable children. It expanded throughout the years and became part of Buckner International 1998.

Alan lived at the Children’s Home until he was 16 years old. He told Jillian and his other children about the highs and lows of growing up apart from his biological parents, but all his stories had one thing in common – the love and support the home brought to the lives of the seven kids and the importance of keeping them together. 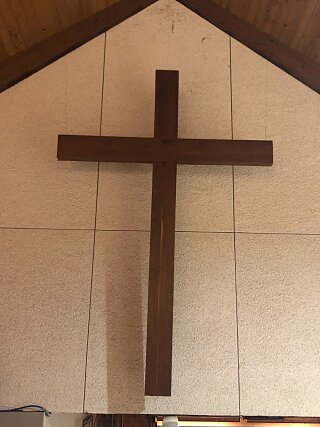 “He was a prankster,” Jillian said, “So a lot of the memories he shared with us were of the shenanigans he pulled at the Rio Grande Children’s Home. But the two memories that he dwelled on were working with animals through the FFA [Future Farmers of America] and building that cross.”

Approximately eight feet tall and solid wood, the cross was a project Alan remembers working on with other kids, as well as his house parents. The methodic process of sanding and painting gave the boys an exercise in patience and a goal to work toward. Seeing the finished cross hung in the Children’s Home chapel filled everyone involved with great pride.

Locating a piece of his childhood

Jillian is a 12 ½ year veteran of the Department of Children and Family Services in North Texas. Her work over the years made her familiar with Buckner and their work with vulnerable children across the state.

In November, Jillian reached out to Buckner to find out what happened to the cross.

“I knew it was a long shot," she said. "But I thought if it was still around, a photo of the cross would make a really wonderful Christmas present for my father-in-law.”

Monica Salinas, executive director of Buckner in the Rio Grande Valley, knew exactly what cross she was talking about.

The cross still hangs in its original place on the campus, though the chapel was long ago converted into a warehouse for humanitarian aid supplies distributed by Buckner to those in need.

“This is actually not the first time a former resident of the Children’s Home mentioned the impact building that cross had on their childhood,” Salinas said.

Staff at the Buckner Rio Grande Children’s Home took several photos of the cross and sent them to Jillian, who printed it off to get framed for Alan as a surprise.

Creating a bond that lasts throughout the years

As an intensive adoption prep worker for CPS, the childhood experiences of Alan and his siblings is especially meaningful to Jillian.

“Even though some of his siblings aged out and had to leave the Children’s Home, the children were able to remain connected and share an amazing sibling bond," she said. “We have family reunions on a frequent basis to all get together with our growing families. Seeing the brothers and sisters all together as adults singing happy birthday was a significant and moving moment for me.

"I can’t help but think about all the sibling groups I work with that miss these moments. And yet, it also fills me with such hope that sibling bonds can stay so strong even through hardship and separation.”

The need for foster homes for sibling groups

Unfortunately, not all siblings placed in foster care get to remain together. The Buckner Rio Grande Children's Home transitioned to community-based foster homes under Buckner, but there continues to be a great need across Texas for families willing to care for sibling groups so they can stay together.

Find out how you can provide a loving home for vulnerable children in your community.