For the second consecutive year, Buckner Foster Care and Adoption is serving children in the Permian Basin at a record pace. Unprecedented numbers of families are stepping forward to shine hope into the lives of children. Here are some of those families:

The Wolfe family (above) adopted Christopher on Feb. 15. He has been with them since he was three days old. The family will continue to serve foster children in the Permian Basin.

The Faircloths (left) adopted two brothers March 19, empowering them to stay together. This family has been blessed to grow into a family of six.

The Vandivers (below) have served children since 2015. They started as a kinship family when they first took Savannah into their home and adopted her. A couple years later, the family welcomed Savannah’s brother Thomas into their home. The Vandiver family adopted Thomas on National Adoption Day in 2017. 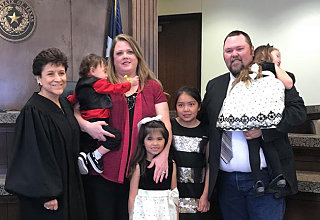 The Vandiver family welcomed Hannah and Jennah while fostering Thomas. The girls were originally reunified with family when Thomas was placed into the home. They returned six months later and were adopted by the Vandivers on
March 19.