Buckner International celebrated its 50th anniversary in the Rio Grande Valley with a ceremony and luncheon. The event featured staff speakers, catered lunch, campus tours and more. Attendees included representatives from local churches, nonprofits, clubs and government agencies who were recognized for the part they have played in the success of Buckner over the years.

“This is truly a partnership and the work we do every day we do because of you and with you,” said Albert Reyes, president and CEO of Buckner International. “It is not our desire to stand alone, but rather to work alongside community partners and share both the challenges and the joys that come with serving others. Today is as much about you as it is about our 50 years in the Rio Grande Valley.”

Since expanding to the Valley in 1971, Buckner has impacted thousands of lives along the southern U.S. border through social services such as foster care and adoption, the Buckner Family Hope Center at Peñitas, the Family and Youth Success (FAYS) program, and various mission projects, such as new home builds. 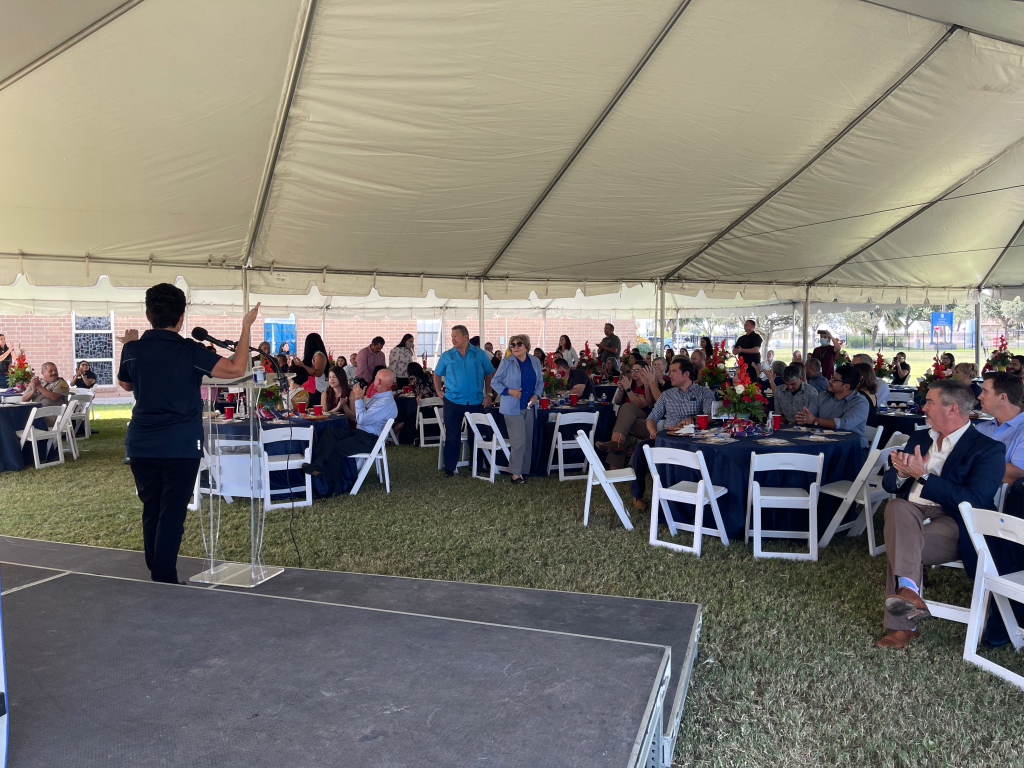 “No organization, especially a charity like Buckner, survives for 50 years on its own" said Monica Salinas, executive director of Buckner Rio Grande Valley. "As much as anything, this anniversary celebration has reminded us that we are part of a community – a team of people coming together for the greater good, not for themselves, but for others who need us, who need you.”

Some of those recognized were the local Rotary clubs, representatives from local schools, the Valley Baptist Legacy Foundation, Wells Fargo, BBVA and many more.

Faith Varlack conducted the Veterans Memorial High School in a performance for the event. Faith and her husband, Gerald, are Buckner foster and adoptive parents. The couple already has three grown biological children. They recently adopted a young boy and are currently fostering a baby boy who they will also adopt. The Varlack family was recognized for their commitment to providing a safe and loving home to those in the foster care system in the Valley.

In honor of the event, Texas Governor Greg Abbott issued a proclamation that was presented during the ceremony. The proclamation celebrated the work of Buckner in the Rio Grande Valley stating, “Your work continues to represent the best of the Lone Star State.”

In addition, U.S. Senator John Cornyn recorded a video thanking Buckner Rio Grande Valley for its service the past 50 years.

“Your work improved the lives of vulnerable children and families through foster care, adoption, and family strengthening programs, and provided a safe haven,” Cornyn said. “The results are plain to see. Know that your extraordinary work has touched the lives of so many in the Valley. On behalf of our state, I send my sincere appreciation.”

Learn more about the ministries in the Rio Grande Valley that help strengthen families and bring hope to those in need.