College was never considered an option for Rhonda Lee. She aged out of foster care and had to fend for herself. College, she thought, was only for those with families to support them.

Because she was always moving around in the foster care system, she never felt safe, secure or even get ahead. Her life felt like a never-ending hamster wheel – to make more money she needed an education. But going to school meant giving up the job that covered her bills and fed her family. Life looked dismal with a minimum wage job and barely getting by.

But all that changed when she came to Buckner Family Pathways in Dallas.

“I came in saying I was going to be a success story – that’s what my goal was. And now I just graduated and passed my National Council Licensure Examination (NCLEX) to become a licensed nurse,” Rhonda shared. “It was one of the hardest things I ever did in my life. I’m just still in shock I did it because it was extremely hard.”

Rhonda and her two children, Amaya and Tristian, came to the program in November 2017. At Family Pathways, they found safety and comfort they had never known before. Before, the family rarely felt freedom to play outside because the location of their small apartment was unsafe. Now, Rhonda smiles as her children experience playing outside without fear. 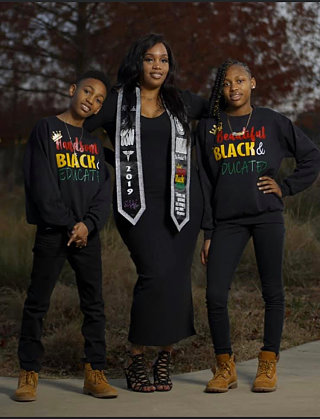 Her dedication and perseverance in education has made a mark on her children. Seeing their mom succeed at college is motivating them to follow in her footsteps.

Amaya, now 12, dreams of entering the computer engineering field and is currently studying Spanish. Tristian, 10, has created goals for himself too – to pass the STAAR test and to read for 10 minutes a day. Watching their mother set her own goals encouraged them to chase after their own.

Each goal Rhonda accomplishes encourages her to set the next big challenge. Now that she has her bachelor’s degree in nursing, she is determined to complete a master’s degree as well.

“I hope one day I’m able to talk to people who maybe didn’t think they could do it and show them that you can do anything you want to do. I used to hear that growing up and think people just said that stuff,” Rhonda said. “But now, with hard work and perseverance, I know you can really do whatever you set your mind to.”

Rhonda and her children came to Dallas with no family, no friends and no support system. But today, she knows God has provided her the second chance she needed to get ahead through Family Pathways.