Can you imagine 371,000 children? That’s enough children to fill every seat in the Dallas Cowboys stadium four and half times.

That’s how many pairs of shoes Rotarians in Missouri Rotary District 6040 have collected in the last 20 years for children in need around the globe. And it all started because of one great idea and one really long friendship.

Larry Lunsford was traveling to Dallas from Missouri for a family vacation, but in his head, he was muddling around ideas for his Rotary District. He was newly elected as the district governor, and he wanted to find a way to unite what was then 54 Rotary Clubs in the North Missouri district. 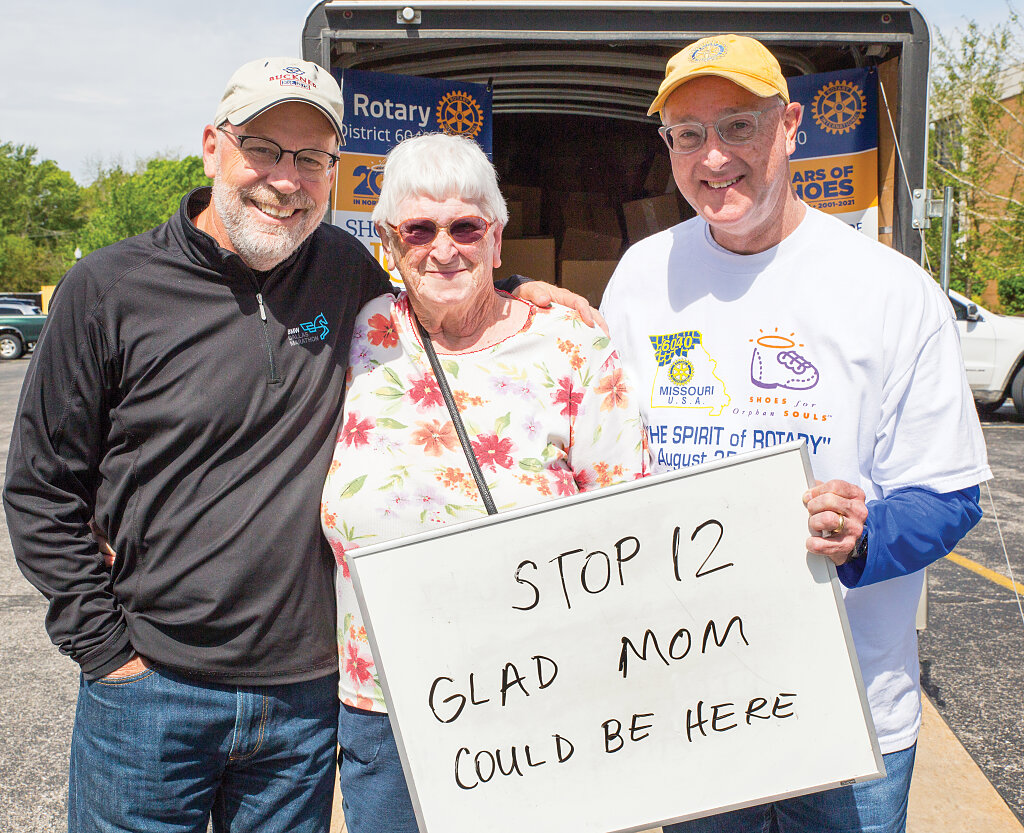 “Service before self,” is the Rotary motto and Lunsford knew the best way to unite the clubs was through a service project. He just had to find the right one.

On his family vacation in Dallas, Lunsford stopped to see an old friend. He and Scott Collins grew up together in Macon, Missouri. They were also teammates, having played countless baseball games together. But they hadn’t seen each other in years.

Their families were visiting with each other in Collins’ family room in February 2001 and Lunsford mentioned his hope to find a service project that would be a good fit for his Rotary District. That’s when Collins told him about Buckner Shoes for Orphan Souls®. 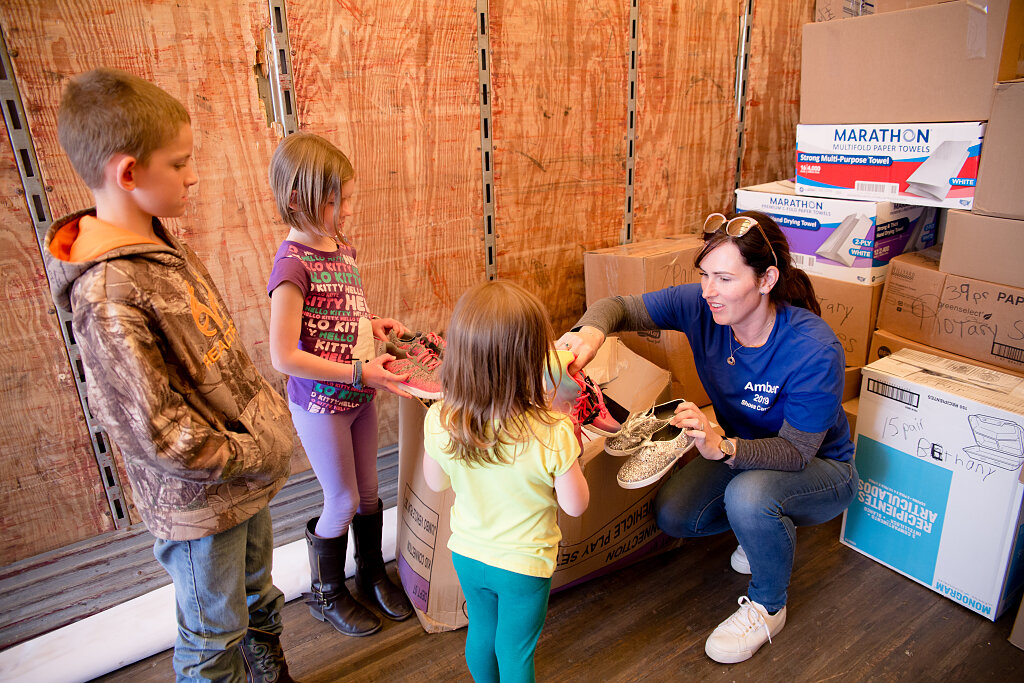 Buckner International had recently acquired Shoes for Russian Souls from KCBI radio and changed the name to Buckner Shoes for Orphan Souls. Collins, who led the Buckner communications team, had just finished shooting a new video for the program.

Collins popped in the VHS and Lunsford was transfixed.

“I’m just kind of standing there in his living room, and I’m like ‘holy cow,’” Lunsford said. “That was the moment when I thought, ‘Well, this could be it.’”

Rotary is an international organization, but for many rural clubs like in Missouri District 6040, it can be difficult to connect on that international aspect of rotary. Shoes for Orphan Souls allowed these clubs to fulfill their motto of service on an international level.

“That’s the real magic in my view,” Lunsford said. “The magic of the Shoes for Orphan Souls project is the fact that it allows Rotarians to connect internationally while serving children.”

And magic it was. In 2001, their first year collecting shoes, Lunsford set a goal of collecting 2,600 pairs of shoes – one pair of shoes for every Rotarian in the district.

At the end of their collection period, the clubs gathered in a central location and did a roll call, publicly declaring the number of shoes each club brought in. They surpassed their goal by almost three times with 7,300 pairs of shoes collected.

“They just absolutely blew it away,” Lunsford said. “It was so magical. I still get chills when I think about that first opportunity.” 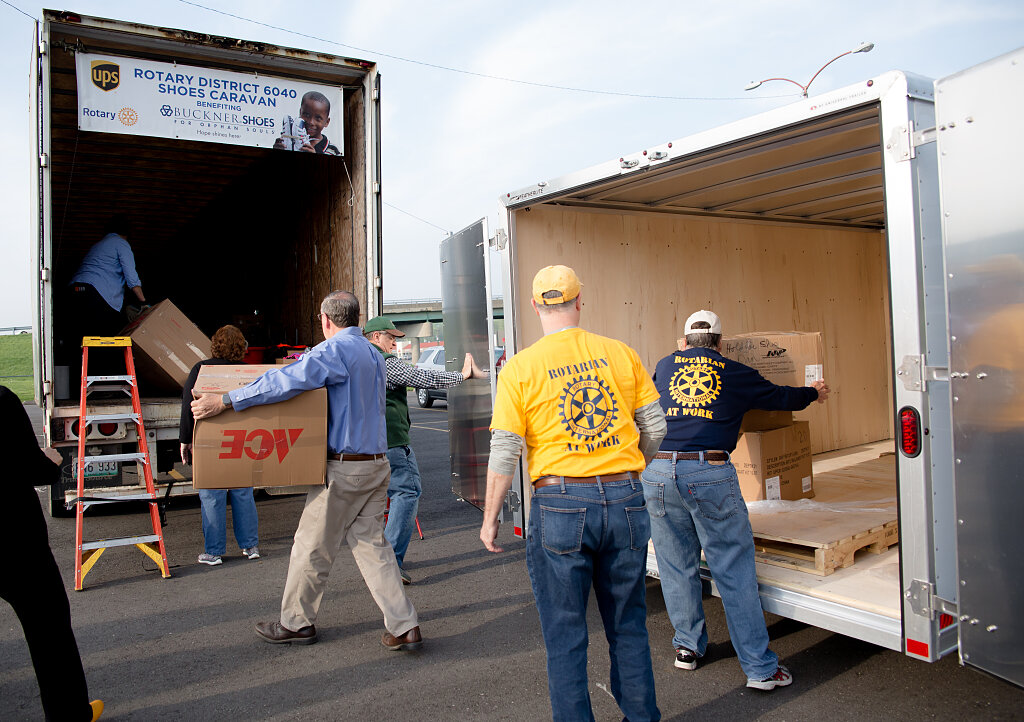 Like Cinderella’s slipper, Shoes for Orphan Souls was the perfect fit for the Missouri Rotarians. They continued to collect shoes each year and their total collection amounts kept growing.

They now have 56 clubs in their district and collect between 15,000-19,000 pairs of shoes each year as well as shoelaces, socks and cash donations. It’s not unusual for a Rotarian to walk into one of their clothing stores in town and buy them out of shoes.

“They get the importance of it for a child,” Collins said. “They’re tied to the story, and they know how powerful that is for a child. They go beyond, ‘let’s just set a goal and hit it.’ They truly get the mission, and I think that’s why they’ve done it for 20 straight years.” 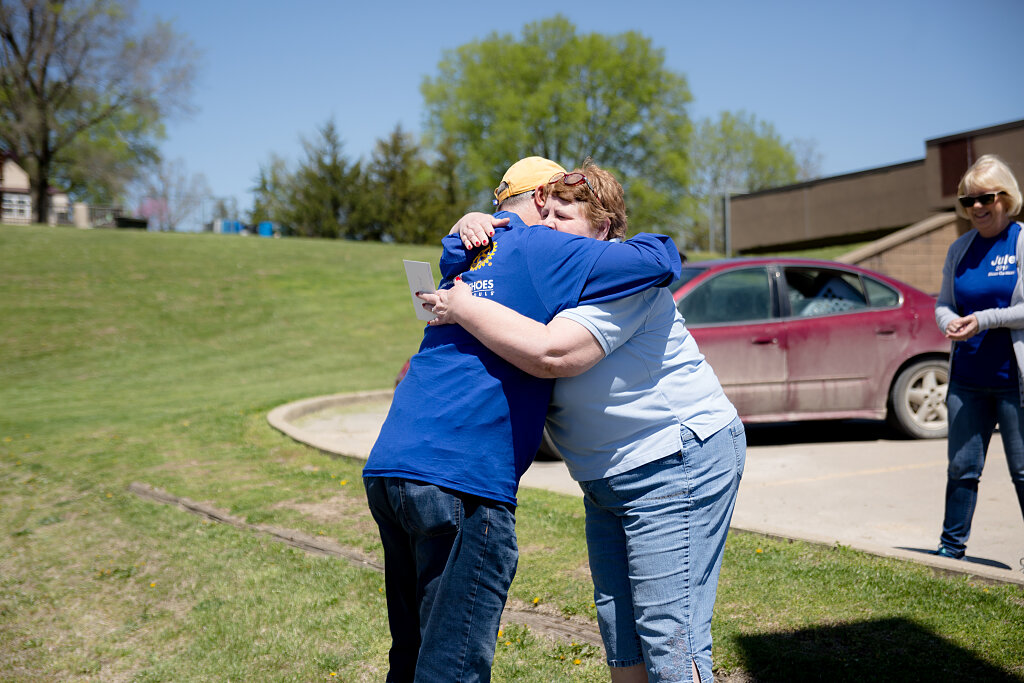 But even the way they collect the shoes has gotten bigger.

Instead of having 56 clubs drop off shoes in a central location, a group of Rotarians caravan with a 53-foot trailer to all the communities throughout Northern Missouri and pick up the shoe donations.

For four days in the spring, the shoe caravan makes over 15 stops throughout Northern Missouri to pick up shoes donated by the Rotary District. The days start early and end late. The trip is grueling, but for those who participate in the caravan, it’s their favorite time of the year.

It’s a bit unusual to see such a large trailer traveling on the rural roads to the pick-up locations. Oftentimes, the trailer will need to make detours to go around low hanging wires or narrow roads. But when the clubs see the truck rounding the bend, they let out a cheer. 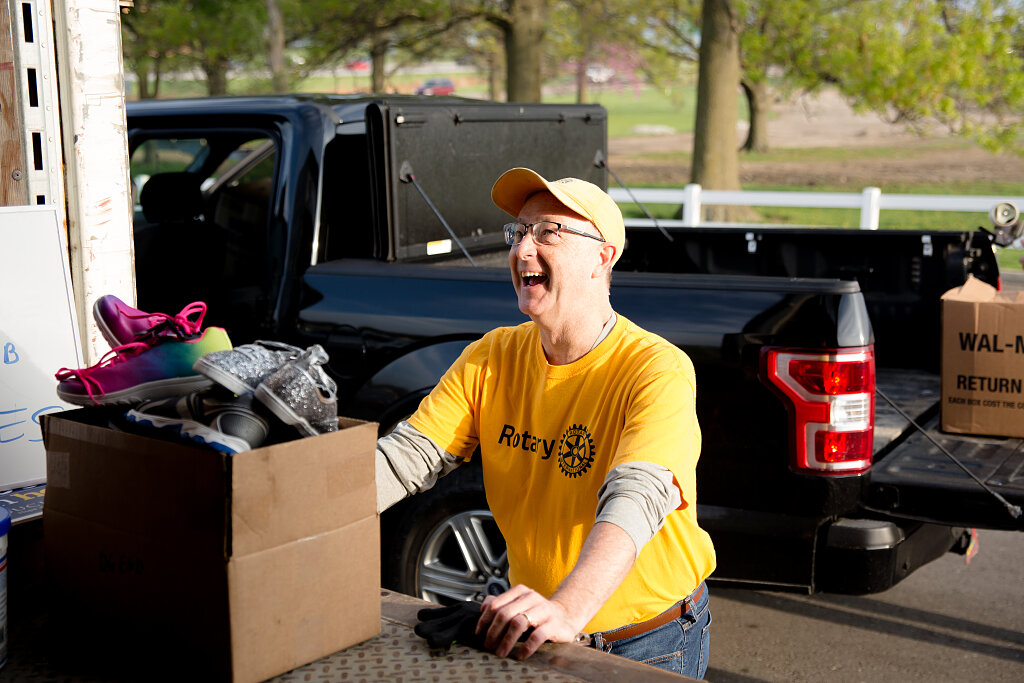 “If you’re a local Rotarian, that’s really exciting,” Lunsford said. “They’ve been working on this project collecting these shoes and then they see the big truck come and they get to load their shoes and see the shoes that are already there. Just to be part of that environment. It is really cool.”

The shoe caravan became another special way to connect all the clubs together. Because of COVID-19 in 2020, they scaled down the caravan to keep it safe for all participants. All stops were made outside, they wore masks and instead of a 53-foot trailer, they drove a smaller trailer hitched to an SUV.

The smaller trailer allowed the Rotarians to make stops in places they could never reach with a 53-foot trailer, and they were able to stop at every rotary community in this year’s 20th anniversary year.

This is just another example of the district’s perseverance and creativity that has led to more than 371,000 pairs of shoes in 20 years.

And it all started with an idea in a friend’s living room.

“It really is all about relationships and connectedness,” Collins said. “Larry and I had no idea 50 years ago when we were playing little league baseball together that we’d be looking at this type of thing. You just never know what people are going to come up with if we give them the chance to think about the things they can do. That’s so significant. Everybody has somebody they grew up with who you never know, they may be the next person to say, ‘What can I do to support what you’re doing?’ That’s cool.”

Want to do a shoe drive in your community? Find out how!