Like many families who endured the effects of an EF3 tornado that hit North Dallas Sunday night, the family of Martha Vega huddled together as the storm roared over their home. 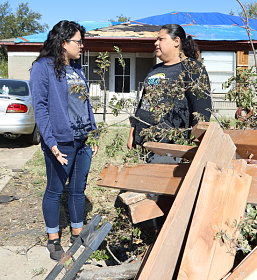 Now, two days later, they are cleaning up the debris from their yards while waiting on word from insurance companies and feeling uncertain about how they will piece together their shredded homes.

For Vega's family, a three-generation group consisting of her mother and father, husband, son and brother, the night ended with their home a missing roof, collapsed ceilings and water damage throughout the house as rains poured into her roofless home. She points to the ceiling above her – and on the floor – as evidence of the storm's fury.

"At first, when the (storm warning) alarm went off, I ignored it," she recalls. "The second time, it said, 'Take cover now, so we said 'We probably need to hide.'

Buckner International President and CEO Albert Reyes said Buckner is uniquely adapted to respond to the disaster because “this is an area where we already have significant work.” He said theBuckner Family Hope Center provides “help and hope to about 4,000 community members through our Family Hope Center services.”

The Family Hope Center temporarily offices at Northway Church on Walnut Hill while its permanent location is under construction at the corner of Lombardy and Geraldine. The new center sustained only light damage in the storm, which did not affect its construction schedule. 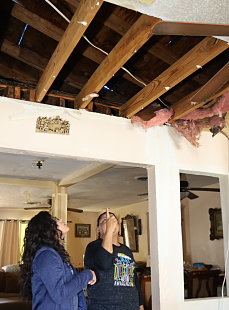 Candace Gray, senior executive director for Buckner Children and Family Services in North Texas, reported that while Northway Church “sustained extensive damage during the storm” the Family Hope Center offices there “sustained minimal damage. But, due to the structural damage to the building, we will not be able to work there for several weeks. We are exploring options for where our staff will office in the meantime.”

She said all Buckner classes and meetings “are being canceled this week. We are considering ways to appropriately respond to the needs of families and children in this ministry area.”

"My mom, dad, and son were awake, and my son grabbed his rosary and started praying," Vega said, still shaken by the event. "It was the longest 15 minutes of my life. In the end, my roof was gone. Mom's car was covered with trash, pieces of metal. We walked up and down the street and made sure the neighbors were OK. My son went to sleep at 2:30 a.m. He was so scared.

Vega is a well-known figure in the area. She's the current PTA president at Cigarroa Elementary School and involved in the Buckner Family Hope Center nearby.

"I take the class, Trabajo de Vida, or Jobs for Life, with [Family Hope Center Director] Ricardo Brambila," she explains. "It gave me a different way to see life and a different way to deal with my son's needs. But what it ended up doing is not just teaching me how to communicate with my family, but the broader Cigarroa family as PTA president."

While Vega has answered several calls from parents seeking information about the school, she's also worried about her home and her family's future. "I'm hoping insurance covers most, but they've placed us in a hotel in one room – three generations in one hotel room. Insurance has extended us to next week, but the adjuster hasn't come out."

"Martha's family is one of four whose home was extensively damaged," says the Buckner Family Hope Center's Youth and Children Specialist Marcela Dominguez as she surveys the damage of Vega's roof. "While Buckner is not a crisis relief agency, we've established a lot of support from the community and can link those supporters with our families. It's one of our strengths."

"Our biggest need right now is cash so we can buy gift cards and other items," she adds. "We're providing some financial assistance with relocations, but more gift cards are needed so families can buy hot food. There's no power in the area right now and may not be for the next week."

With assessment still ongoing as of Tuesday morning, Brambila said initially three client families will need help with extensive home repairs or replacement, while a “significant majority of the 4,000 family members we serve are without power and we are seeking cash to purchase gift cards to help provide them with food and other emergency supplies.”

Brambila said he and other staff members are working to arrange for meal delivery to affected families. Buckner is currently collaborating with Texas Baptist Men to provide lunch today to 200 children in an apartment complex Buckner serves, said TBM Director of Communications John Hall.

“We’ll provide up to 400 meals in that area and work with Buckner to help clear debris from affected homes soon,” he said.