In a church full of people running to and fro, one room stands out. A small group of men are gathered inside talking quietly, sporadically even. Occasionally, a bit of laughter breaks the tension.

Gaudencio Martinez voices how all of them are feeling: “Nervous.”

Another room buried even deeper in the church has a significantly different tone. The group of women here is talking quickly, excitedly. They hold still as they put on make up, then jump back into action.

The scene may be different, but Silvia Lares voices a similar emotion for the women: “Nervous.”

For the four couples who have come together to be married in one ceremony at The Village Church in Dallas, this day is years in the making. Nineteen, to be precise, since Gaudencio and Silvia met at a friend’s house. 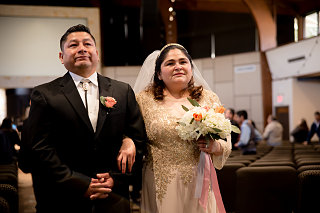 The brides and grooms may have been brought together by fate, but they’re here today in large part because of their involvement in the Buckner Family Hope Center at Bachman Lake in Dallas.

All of them have participated in classes to strengthen their families and their relationships. Their children have been involved in Buckner programs as well. As families, they have volunteered to help their neighbors through Buckner.

All four couples were married in a joint ceremony led by Albert Reyes, president and CEO of Buckner International, and Ricardo Brambilia, director of the Family Hope Center.

“We serve families at every level,” Reyes said. “We help them work through economic, emotional and spiritual issues. In the process of those conversations, we talk about God’s model for the family. We talk about husbands and wives committing to each other, laying the groundwork for stability for the entire family. These couples today are standing before their neighbors committing themselves and their families to God.”

The moment nearly overwhelms Gaudencio in the middle of the ceremony. He fights back tears as he professes his love to Silvia. He prays it’s an example of what a godly relationship looks like for their teenage sons.

“My wife and I believe it’s a good example for our sons,” he said. “It’s a symbol of unity for the family.”

Buckner programs already have made a tremendous difference in the family’s life, Gaudencio said.

In some ways, a ceremony 18 years in the making is the start of many years to come.

“I wanted to be more of a family,” Silvia said. “Buckner gave us that opportunity.”