Feeling suffocated by the cycle of debt can stifle every decision a family makes. According to Experian, nearly 80% of Americans are weighed down by debt. The Garcia family, though, decided to break the cycle of debt by making a change.

Melissa Garcia stopped into the Buckner Family Hope Center at Peñitas one day, simply curious after hearing recommendations from others about it. Pregnant with their fourth child and living in a small RV, she was desperate for resources to empower her family financially.

Ready to break the cycle of debt

She and her children started attending classes at the Family Hope Center, and she plugged into family coaching with Liliana Alejandrez, a family coach there. The weight of the debt and dreams that didn’t feel any closer caused friction in the Garcia family.

“My husband and I would get into arguments because he would be frustrated, I would be frustrated. But Liliana started teaching us how to meet goals and budget, and even make a list of all the things we have to pay,” Melissa shared.

She spoke to her husband about the meetings she was having with Liliana and he got on board with their new goals and vision, willing and excited. Paying bills off little by little, their dream of building a home on land they had purchased creeped closer and closer. They began the frame of their new home in March 2019, and after a few hiccups, moved in two days before Christmas that year, right before their fourth son joined the family.

A new child, a new start

They welcomed their fourth child on January 10, 2020. Melissa couldn’t believe the timing – two weeks after they had finished their home and were able to move out of the cramped RV. It was perfect.

By November, the family had paid down nearly half of the long list of debts they had – including their home. They also have a healthy savings account. The couple feels stronger than ever and is looking forward to the new goals they are dreaming up, with the fresh confidence they can do it wisely and without stress.

“I used to cry every day because we didn’t have money for anything. I was just always stressed, and I slowly felt more and more secure with the support I felt in Lily’s office at Buckner,” she said.

Liliana has watched this entire family go through stress and strain, not only with the weight on their relationship, but also facing requests for help from other family members who were also struggling. Melissa and her husband went through every task Liliana asked of them and she watched their excitement and confidence grow.

“We focus on bringing hope to families and even though it might be difficult, and you might not see a way out, there is a way out. Sometimes, you just need a little bit more support so you can see that. I was happy to see them put in all the effort, see that they can do it and get out of this cycle of stress and debt,” Liliana shared. 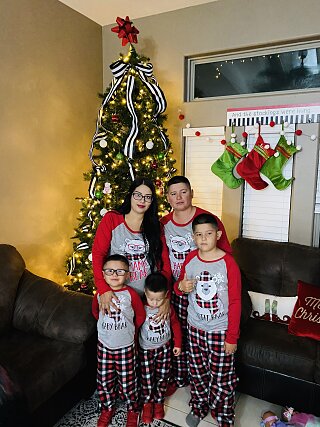 “This helped me so much and I tell others to go for it. Most of the time it doesn't just help you financially, but with your relationships with your husband, kids, family. We learned how to organize and communicate way better than before and we are so much happier,” Melissa said.