“She was an absolute miracle in every single way,” Jennifer said.

While holding their little girl, tears streamed down Jennifer’s face. The Perezes were in heavenly bliss for exactly 31 hours and 22 minutes, but all their struggles leading up to this day were worth it.

Jennifer and Mace always knew they wanted children. And for Jennifer, adoption always had tugged on her heart even when she was an adolescent.

Jennifer and Mace thought they would have biological children first, then adopt. But after two years of infertility, they felt God was taking them a different direction than they had planned.

They went to their first informational meeting at Buckner International with another plan – to look at domestic infant adoption. But again, God changed their thinking.

“After the meeting, we sat down with a case manager and he asked us if we had ever considered foster care,” Jennifer said. “My initial reaction was there is no way I’m going to ever foster. I can’t do it. I love children too much. I walk in a room, I see a child and there is an instant love. There is no way I could foster a child and give them back.”

But Jennifer and Mace agreed to pray about it and slowly God changed their perspective. They realized they were being called to foster care.

“The Lord made it so clear to us that we were called to adopt, but we were also called to foster. That was his plan for us,” Jennifer said. “Our perspective on fostering and adoption changed. We’re not doing this to gain children for our own family. We’re doing this to give our family away to another child or children who need us.”

“We became more and more foster minded,” Mace added. “We began to see ourselves as a foster family first.
And in the event a child needs a forever home, we want to say, “Yes, we will be that home as well.”

The Perezes decided to take in emergency placements, meaning they often received a child in the middle of the night who needed to be placed in a home immediately. The child would stay for a short period then be moved to another home.

Saying goodbye was hard, but through it all, Jennifer and Mace learned God was with them even during the challenging times.

“What the Lord kept reminding us is that he doesn’t call us to a comfortable life. He calls us to a life of radical obedience,” Mace said. “Where we are weak, he is strong. And he gives us everything we need, every time, without fail.”

And so it seemed every time Jennifer and Mace became accustomed to their current situation, something else would happen to shake up their lives. And after fostering for seven months, their next surprise came in the form of a 3-year-old boy named Bernard.

Unlike the other foster children Jennifer and Mace had cared for, Bernard needed a forever home. When a kinship care placement fell through, his case manager asked Jennifer and Mace if they would consider a foster-to-adopt placement.

The next day, energetic Bernard bounced into their home.

“Bernard is a big personality in a little body,” Mace said. “He has never met a stranger, and I think he’s the most popular person at our church.” 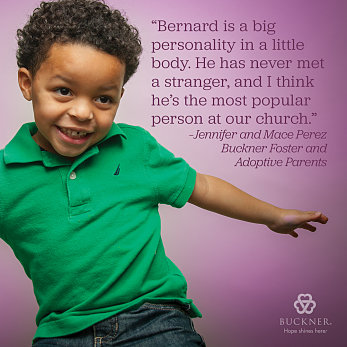 “From the very beginning, we knew that Bernard’s final plan was going to be adoption,” said Jennifer. “But after walking out of the courtroom, a whole shift of our heart just went to the idea of when you know this child isn’t going to leave and you know you get to spend the rest of your life with him. I mean, literally sometimes, we’ll look at each other and we’ll say, ‘He’s not leaving.’ We get to watch him grow up. But the excitement you get as a parent to be able to say, ‘The Lord has allowed us to have you for a lifetime,’ is just unbelievable.”

Shortly after Bernard was placed in their home, Jennifer discovered she was pregnant for the first time. Jennifer and Mace were ecstatic.

“I will never forget, it was Aug. 10, which is my birthday, and I was sitting at the kitchen table eating my breakfast,” Mace said. “Jennifer walks out of the bedroom with tears in her eye. I turned to her, and with all the joy in her heart said, ‘I’m pregnant.’ And so we were, of course, overjoyed.”

Because they suffered from infertility for so long, they had regular check ups and ultrasounds to check on the baby. With each passing week of good health, Mace and Jennifer began to relax. At their 11-week ultrasound, however, they received a life-shattering diagnosis.

The ultrasound revealed their baby’s skull had not developed correctly. Their doctor informed them there was no chance their child would survive.

“I finally released that cautious nature and was fully sold on, like, we get to have a baby,” Mace said. “After years of praying and surrendering, this was really going to happen. Then to get that far and be told that even if the baby makes it to term, it’s not going to live for very long. We just sat there crying.

“After several minutes, we embraced each other and said we needed to pray. I didn’t have the words. I said, ‘Lord, we’re heartbroken. We’re devastated. But you’ve taught us a lot in what you’ve already brought us through, and we know you’re good and we can trust you. We have no idea what this means, but we just pray that somehow, in some way, even in the midst of this tragedy, that you will be glorified.’ I didn’t know what else to pray for. That’s all I could say.”

And God answered their prayer. Jennifer and Mace were overwhelmed by the support they received and the opportunities for ministry that opened up to them. Throughout her pregnancy, Jennifer had just one wish. She wanted to hold her baby.

At 39 weeks, Jennifer delivered Hannah. She lived for 31 hours and 22 minutes – hours and minutes Jennifer, Mace and Bernard were able to hold her, kiss her and make short, but dear memories to last them a lifetime.

“It was amazing to see God answer our prayer for him to be glorified through such a tragic situation,” Jennifer said. “Even the fact that she was born at 39 weeks, that she survived my entire pregnancy. She was born alive and breathing, and she was an absolute miracle in every single way. And even now, to this day, we are able to look back and say, ‘God, you were with us then.’ And that promise he reminded me of time and time again is, ‘I’m with you and you’re not doing this alone.’”

Today, the Perez home is active. They continue to do foster care, a ministry Bernard has also embraced. He welcomes foster children into the home, dotes on them and sings to them.

“We feel that this is a whole-family ministry and he is a part of that now,” Mace said. “We’ve opened our home twice since Bernard was adopted and both times he’s been a part of that decision. The blessing of it is that rather than being harmful, it’s actually been very character-forming for him. He’s seeing that this is what people who love Jesus do. We do radical things for Jesus and show love for others from hard places. It’s been a beautiful thing.”

Recently, the Perezes had three foster children living with them – energetic 4-year-old twins and a 6-year-old girl. Toys are often strewn across the floor, Play-Doh resides on mats on the table and the pet dog sits under the table hoping some lunch crumbs will drop to the floor. Sometimes, it could be described as crazy.

“We have a phrase that we like to use in our home,” Jennifer said. “’We’re going to embrace the crazy’ Anytime we feel the Lord tugging at our hearts while we’re thinking, ‘This is crazy,’ we just lay it down and say, ‘OK Lord. We’re ready to embrace the crazy.’”

But no matter how crazy life gets, Hannah is never far from anyone’s mind. Around her neck, Jennifer wears a necklace with Hannah’s handprint imprinted on it and on the wall in the kitchen is a collage of photos and mementoes related to Hannah’s birth. Even their foster children who never met Hannah, know that Auntie and Uncle (their nicknames for Jennifer and Mace) have a baby in heaven.

“It makes heaven more real for them,” Jennifer said. “I’m thankful for that.”

Through talking about Hannah, Jennifer and Mace have been able to have countless conversations not only with their foster children but with others in their community about the hope and trust they have in Jesus.

“We would never wish what we’ve been through on anyone,” Mace said. “It sometimes still seems surreal that we’ve even been through that. But it’s so amazing to see how when we’re faithful and we lean on him, the Lord took this tiny little life, a little baby girl, who only lived for 31 hours and 22 minutes outside the womb, but literally touched thousands of lives.”