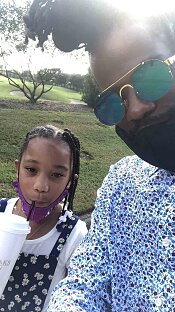 Kenneth Horn and his four children moved into New Hope Housing in Houston in January 2019.

After six months of keeping his family inside the apartment, Kenneth took a chance and ventured out to the Buckner Family Hope Center across the street.

Kenneth is an enthusiastic, active participant in the Family Hope Center. He is president of the Resident Advisory Council and a graduate of the nurturing parenting series. He also is a member of a few men’s groups.

“The past two years have been spent figuring out what’s next for me and my family. I’m starting to see some glimpses of good things to come,” Kenneth said.

Today, Kenneth passes on the truths he learned from Buckner to his children. He reminds them how important school is and encourages them to be anything they want to be.

“My kids are getting to witness that we can take matters into our own hands,” he shared.

The positive changes Kenneth has made to his own mindset is affecting his children’s as well. His children will never grow up knowing the life he grew up with.

“Kenneth has changed the outlook for his next generation,” said Dior Burns, Family Hope Center director at Reed Road.

Becoming a leader for vulnerable families

Kenneth recently started a job with New Hope Housing through University of Houston and the city of Houston. In this role, he supports vulnerable families in the community in similar ways the Family Hope Center once provided him.

“I’m so thankful to have been a part of Kenneth’s journey,” shared Shawn Owens, Buckner family coach. “You meet somebody, you hand them the baton, and not only do they run, they run and hand that baton to other people – that really is our goal and dream. And now, we get to work together in this space.”

For Kenneth, his journey has come full circle.

“Hopefully I’ll run into somebody like myself who just needs some encouragement, a little love and some motivation,” he said.