Chaplain John Bender has spent most of his career as a pastor and church educator in churches in Tennessee and Texas. But in 2016 when the door opened for him to serve as a chaplain at Parkway Place, a Buckner senior living community in Houston, he walked through – and into a new phase in his life story of faith. He also discovered, much like his counterparts, that door led to a new world of stories of life and faith.

He said as a chaplain, his purpose is “to do life with the residents. I find purpose by listening to people’s stories. Some people say, ‘I don’t have a story,’ but if you sit and talk with them alone, everybody’s got a story to tell. My purpose is to walk with each resident through their story – when life is great and when life falls in.” 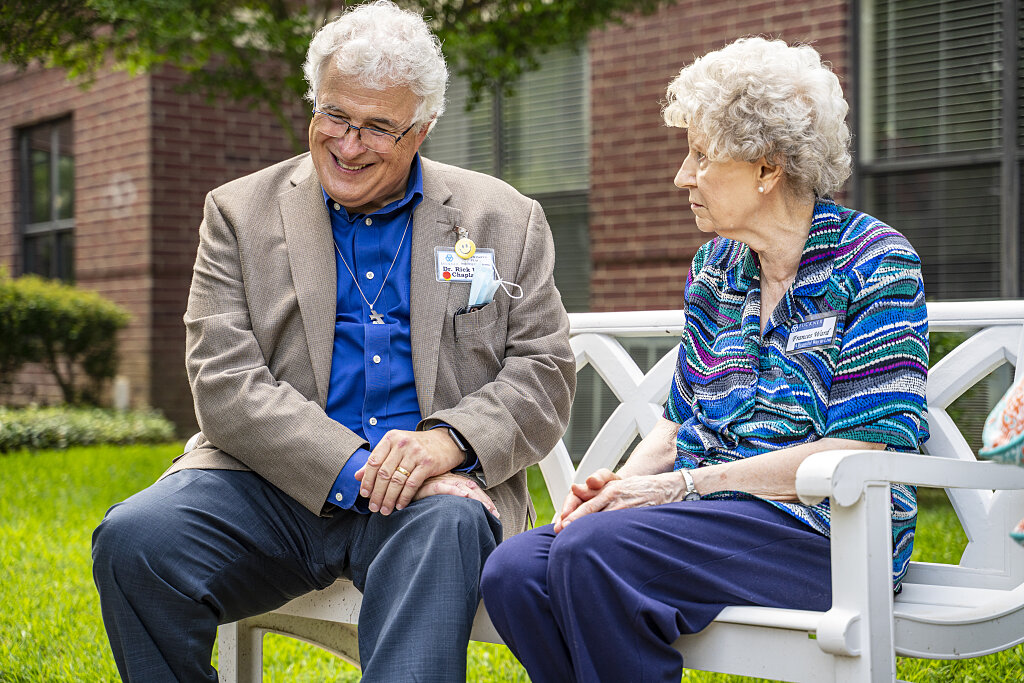 Rick Webb, chaplain for Buckner Westminster Place in Longview, Texas, said sharing others' stories is the result of a relationship that chaplains must first build.

“With chaplaincy, you have to build a relationship. You earn the right to be heard,” he said. “Early on, I met a lady I went to visit in the hospital and after a fairly good visit, she still seemed distant.

“That just doesn’t happen,” he said. “In the South, even polite atheists will let you pray for them, so I was really surprised when she said no. “Over the course of time, we built a relationship and began to talk more and more,” Webb recalled. “I found out she had been angry with God since the Battle of the Bulge in 1944. She was young, married. Her young husband had just deployed to training in Belgium where it was ‘safe.’ That’s what they were told. That’s what she believed as a young wife.

“Yet he gets killed in the Battle of the Bulge because that’s where the Germans tried their push. From that point in time - 66 years later - she had been holding onto this anger at God having taken her young husband,” he said. “And, you know, sometimes you walk into those moments, and they don’t train you for this in seminary.

“But when she told me she was angry with God, what popped into my head? I just said, ‘Well, you know what, God still loves you and he’s not angry with you. So let’s talk.' 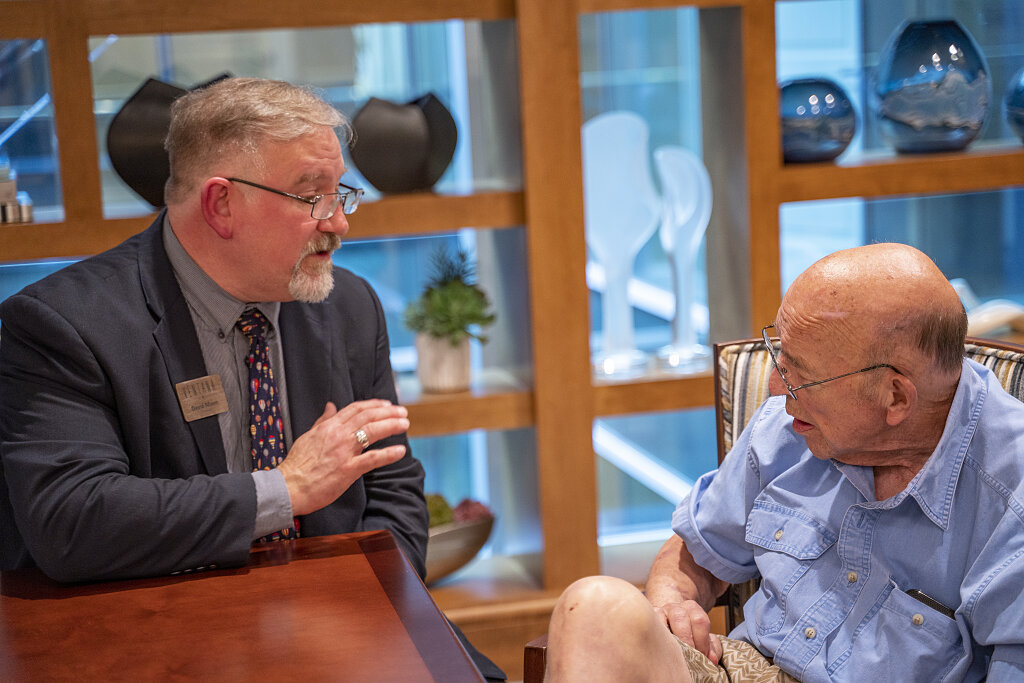 Similarly, Chaplain David Mann sees his ministry as a way to “walk alongside” members at Ventana by Buckner in Dallas.

“I’ve always felt comfortable with the senior population,” Mann said. “Something that’s really near and dear to my heart is that I get to journey alongside people of all kinds of different faiths, people who have come from all different types of life. It’s just really exciting to be able to do this journey with them.”

Mann, who provides chaplaincy services through a unique collaboration between Buckner and Baylor Scott & White, sees ministry to seniors as a sacred “privilege.”

“One of the keys of what I believe is found in Genesis: How the Bible reminds us we are all people made in the image of God,” he shared. “I have an opportunity to walk alongside with or hold their hand or listen to their story or offer some spiritual insight with a person made in the image of God. It is a tremendous privilege to be able to do that.” 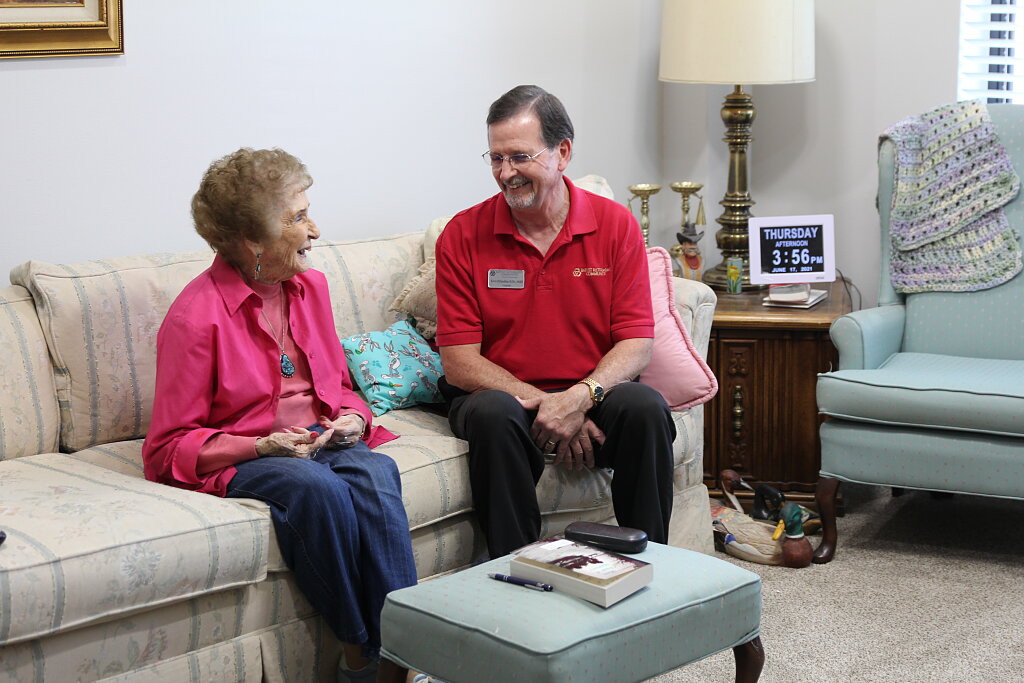 Chaplain Kenneth Harpster of Buckner Villas in Austin sees each individual resident’s story as puzzle piece into one collective story. He said he is able to share their life stories with others when he conducts memorial services for those who pass.

“Whenever we have a memorial service for our residents, I get to take the pictures they have given me and I scan them in,” Harpster said. “I make them a PowerPoint with whatever music they want. I get to see their lives from beginning to end. It’s worth every minute and for me, it’s just great fun and a great joy to do that.”

For many of the chaplains, sharing life’s stories always leads back to sharing the story of the Gospel of Christ. 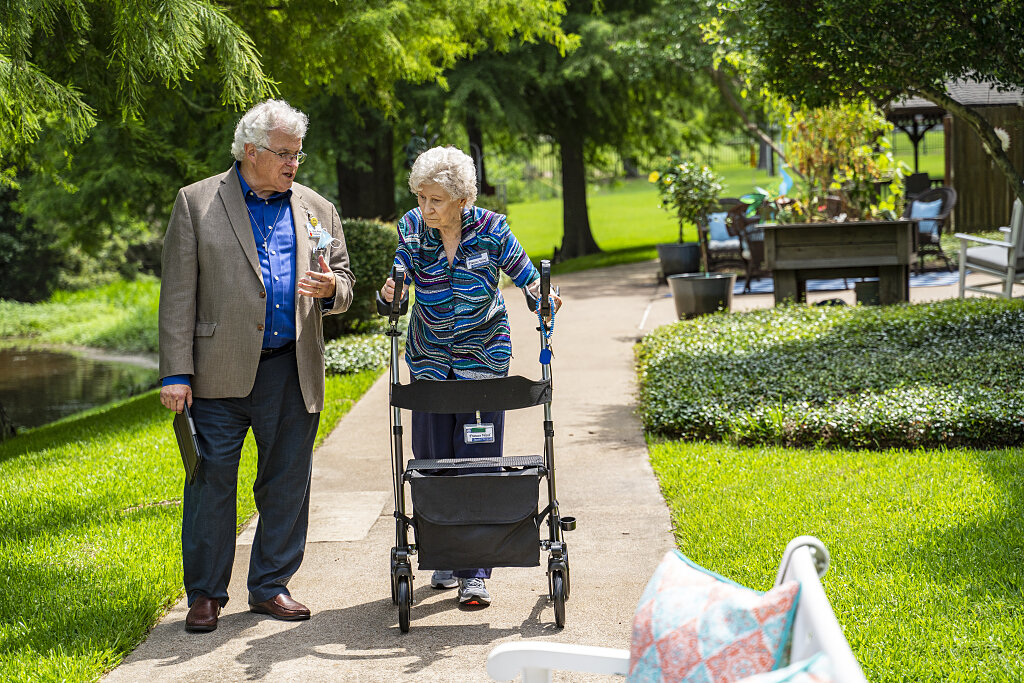 “Each generation has a different set of values, but really, it’s just the way that they process things,” he said. “And they also have a different set of concerns, things they’re processing. And so, the goal is always to get to the Gospel, but sometimes you have to help them process it in a variety of ways.”

“My theology or philosophy of chaplaincy is biblically based,” added Chaplain Kevin McSpadden of Baptist Retirement Community in San Angelo. He said his ministry is based on a biblical passage from the Apostle Paul. 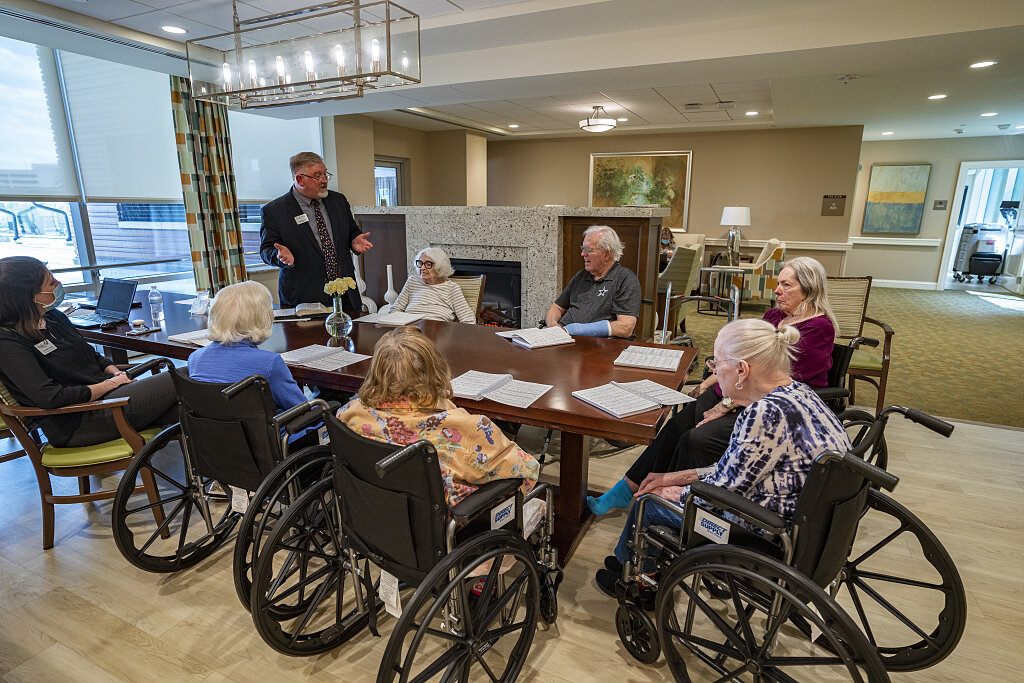 “I have a favorite verse, and it’s the one on my business card,” he said. “It’s from 1 Thessalonians where Paul wrote, ‘We loved you so much. We’re delighted to share with you not only the Gospel of God, but our lives as well, because you had become so dear to us.’ That’s what it’s really all about, that we share the Gospel.”

McSpadden said he also focuses on the personal value of each resident.

“Our folks are older now. They don’t feel valuable anymore in different ways. They used to be the head of something. They used to be a church pastor, or they used to own their own business. Well, they don’t do that anymore. So we make sure we try to do all we can to make sure they understand they’re still valuable. They are valuable.” 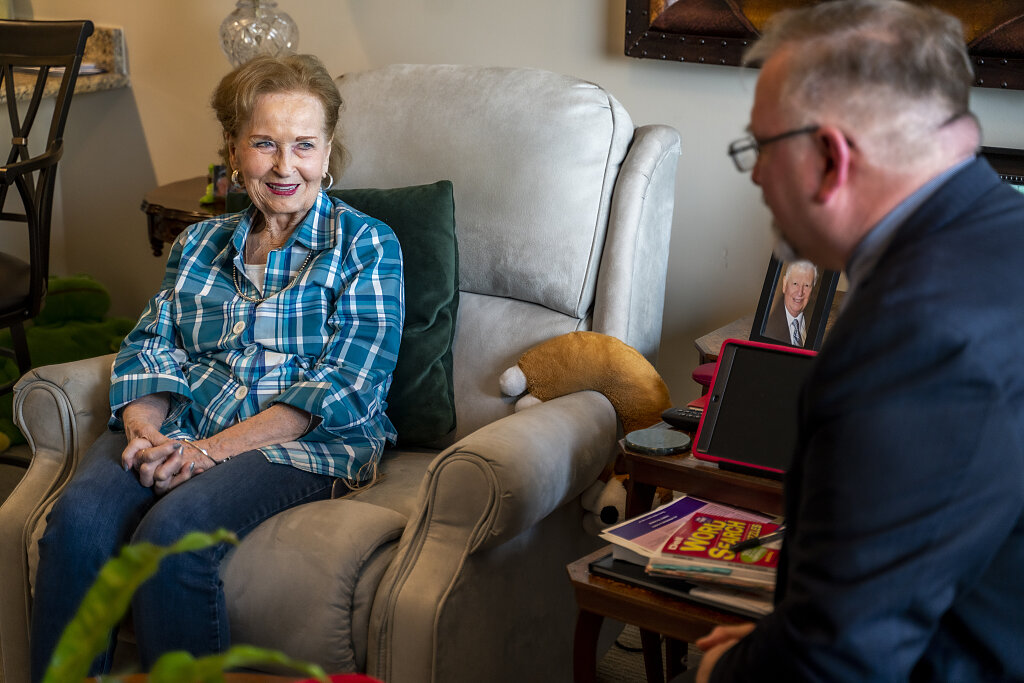 Webb also noted the lack of value some residents feel, often because of the emphasis modern culture places on youth.

“America is a youth culture,” he said. “But the truth is the scriptural approach to age is that they ought to be respected and cared for and loved. At Buckner, we have the chance to do what God asks us to do with all the elderly. And that’s an absolute joy.

“I deal with people preparing for eternity while living life to the fullest every day,” he said. “I take the Gospel of Jesus Christ and apply it to the needs and the hurts and the pains and the challenges of aging.”

“People have different struggles,” said Charlie Wilson, president of Buckner Retirement Services. “The chaplains help them through that, the chaplains meet the spiritual needs of the residents, the members that live there and the associates that work there every day.

“As a faith-based organization. It’s critical to our mission,” he said. “We’re proud that we’re centered in Christian beliefs, and we serve all people. But that’s the core to what we do and where that sets us apart from other communities. There’s a lot of other options for people. A lot of them have no faith connection, but people that really want to strengthen their faith know that Buckner is a really good option for them.” 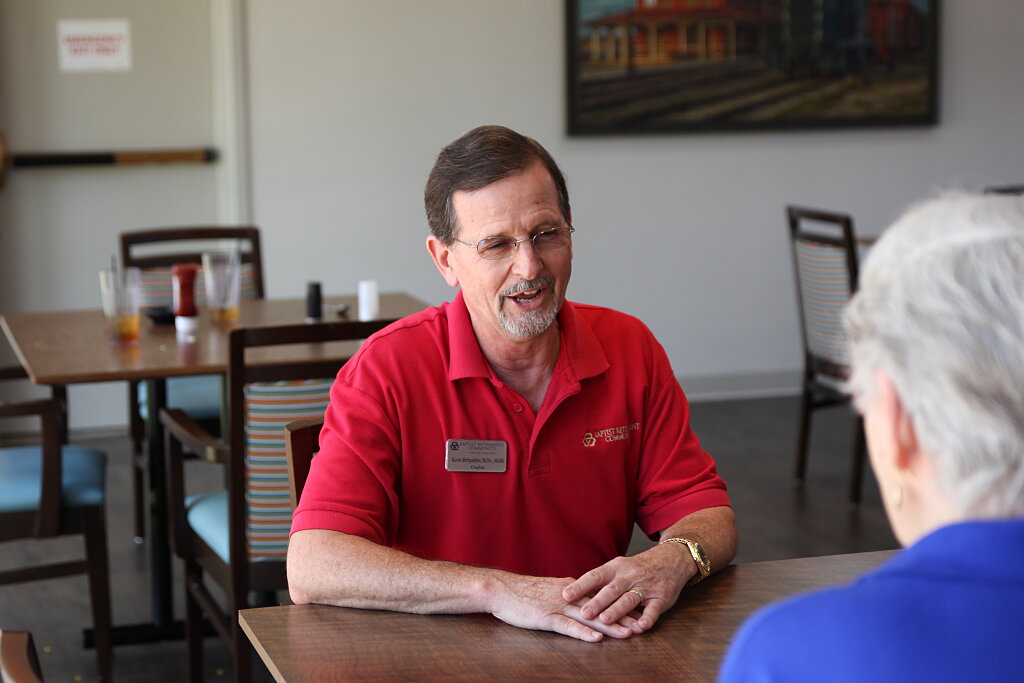 Unlike many ministers, though, chaplains who have walked alongside seniors and shared their stories often face the inevitable need to say goodbye to their constituents, Mann said.

“One of the biggest challenges I think, of senior ministry is in those times when someone’s coming to the end of life, and you’ve made that relationship with them and you’re having to say goodbye. It’s also a blessing. It’s the blessing of getting to know people, but it’s also the challenge in the heartache of having to say goodbye so many times.

“But, we’re blessed that we have a wonderful opportunity to take care of these people,” Mann reflected.

See how Buckner Retirement Services is inspiring happiness at their senior living communities.