At the end of Abigail Tlamasico’s first semester at Angelina College in Lufkin, Texas, all that was left to do was pack her bags and tell Buckner Family Pathways Director Holly Valentine she was leaving. She tried to go to college. It just hadn’t worked out. Her 1.0 grade point average was proof enough of that.

Holly refused to let her quit. Abigail’s potential was clear, even if she herself couldn’t quite see it yet. 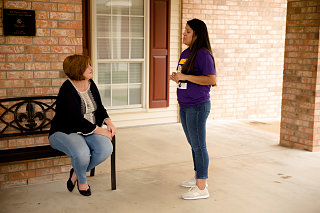 “I knew Abby could succeed,” Holly said. “I just knew it in my heart. I could see she had so much to offer; it was just a matter of unlocking her potential.”

Abigail enrolled in her second semester and refocused her efforts. With the help of Buckner, she learned how to study for her courses. Quickly, she realized she could do the work and do it well.

“After that 1.0, let’s just say there was no sleep,” Abigail said. “Before my week started, I’d prepare all my food. I’d go to work, then I’d come home and study day and night. Some nights, I’d only get one-two hours of sleep.”

In a year, her GPA climbed to a 3.0. She became comfortable at school and in Lufkin. The city became home for her and her son, Aaron. They made friends throughout the community who encouraged them along the way.

“Buckner has helped me open up. I was afraid to meet people. I was so insecure. I didn’t trust anyone. I didn’t have the skill to reach out and create relationships,” Abigail said.

Holly beams as she talks about Abigail.

“Abby has become everything I thought she could be and more,” Holly said. “She’s a tremendous mother. She’s incredibly smart. She’s just amazing. In the process of a few years, she’s really discovered who she is and followed her heart to help children who need help.”

Five years later, that first semester was clearly a turning point in Abigail’s life. She’s finishing her bachelor’s degree in education at Stephen F. Austin University with a 3.6 GPA as well as her student teaching. She’s investing her life into students who once struggled like she did to help them achieve things they once thought impossible.