Normal is a funny word. It means something different to everyone. What’s normal to you definitely isn’t normal to someone else.

Living in a home is normal for some people; it isn’t for 14-year-old Amanda Martinez.

Feeling safe when you walk out your front door might be normal to some. Amanda wishes she could imagine it.

And that’s just it isn’t it? Everything that is typical for a person now was once new – even unimaginable. But they experienced it, sometimes again and again, and it became normal.

That’s what scares the staff of the Buckner Family Hope Center at Bachman Lake in Dallas. It drives them to shine hope into the lives of children and families there.

More than 82,000 people live in the 3-mile circle just north of Love Field in Dallas known as the Bachman Lake community. When the air traffic is busiest, planes fly across the area every two minutes and they’re a regular occurrence throughout the day. Travelers come and go without noticing the area just before the landing strip.

Bachman Lake is home to more children under the age of 5 than any other area in the city, and many of them live either in poverty or under the constant threat of it. Fifty-seven percent of residents here have less than a high school education, limiting their job opportunities and earning power. The Child Protective Services removal rate is twice the Dallas County average.

Amanda knows the threats only too well. She sees them each time she walks out the door of the one-room apartment she shares with her parents and two siblings. In the parking lot, men loiter. Some sell drugs; others are drinking, no matter the time of day.

The situation doesn’t get any better beyond her complex. Gang activity is common in the area. In the past three months, five shootings have taken place, including one that wounded a 9-year-old boy. At 4 p.m., young women can be found selling themselves at a nearby gas station. Such activity only increases when the sun goes down.

“Unfortunately we have seen in this neighborhood young girls prostituting themselves,” said Marcela Dominguez, youth and children specialist at the Family Hope Center. “It’s sad because sometimes kids witnesses this and it’s like, ‘Is this OK?’ My concern for Amanda is that she loses herself and gets sucked into the life this neighborhood is allowing them to see.”

In this environment, it’s easy for families to fail. The stress of poverty weighs heavily on them and affects parents’ relationships with each other and with their children. Amanda’s family nearly collapsed last year.

Serapio Martinez, Amanda’s father – at that time the sole financial provider for the family – lost his job, leaving the family in financial shambles. The situation was so difficult the family considered returning to Mexico. Homelessness loomed over their heads.

“I felt scared because living on the streets is kind of dangerous,” Amanda said.

That’s when Amanda’s mother, Marta Hernandez, discovered a new effort in the neighborhood.

He met with churches. He visited with groups in the area. Brambila attended as many school meetings as possible, where he could connect with the parents the center would eventually serve. He wanted to truly understand the needs of the community.

“In the Bachman Lake area, we have a tremendous amount of people. It is so dense a community that we have apartment complexes where we have families of seven living in one-bedroom apartments,” Brambila said.

Brambila started a parenting class in the auditorium of an area elementary school teaching parents how to connect and communicate with their family. Hernandez came hoping to learn how to build a better bond with her children.

“Buckner has helped me to be a better mom,” Hernandez said. “I used to get very upset with my children if they didn’t study. Now I have more patience and talk to them calmly. All the classes I’ve taken at Buckner have helped me. Buckner is hope to be able to get ahead. Buckner has helped us a lot.”

The change was tangible.

“Buckner has changed my life because when my mom went to the classes for parents, before she didn’t have patience, then the classes started to help her and she started to have more patience,” Amanda said. “She gives us more hugs. She loves us more.”

As Brambila became acquainted with Hernandez, he learned one of the reasons for her impatience was the stress weighing on her. Her husband and the family’s sole financial provider, Martinez, recently had been laid off from his job of 17 years.

“The hardest time we’ve faced has been when my husband was let go, and he didn’t have a job,” Hernandez said. “I was depressed. I was losing hope and I thought that if he didn’t find a job we would have to go back.”

Martinez and Hernandez had started making piñatas and selling them through a broker to get by financially. Martinez would cut bamboo from a nearby river, and the couple would build the skeletons and cover them with colored paper for hours at a time.

Buckner staff members helped the couple create a business plan, learn how to market their piñatas and take advantage of larger opportunities to sell their products. As a result, the couple started making more than double what they were making before off each piñata.

The income helped the family get by until Martinez found another job and now the piñatas supplements Martinez’s paycheck to build a down payment on a house. Amanda helps throughout the process. It’s hard work, but it reinforces bonds between family members. 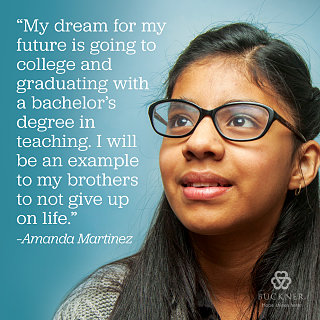 “My children helped,” Hernandez said. “They say, ‘Mom, that doesn’t go like that, it goes like this’ and together we shape it, so the piñata looks good. It is an art.”

Amanda smiles as she reads a book while sitting on the higher of two bunk beds. She loves to learn and is passionate about learning. She’s such an excellent student that she’s in the early college program at Thomas Jefferson High School, where she’ll earn an associate degree at the same time she receives her diploma.

From there, her future is as bright as her family is happy. She wants to be the first college graduate in her family, then become an elementary math teacher.

That’s anything but normal.

“My dream for my future is going to college and graduating with a bachelor’s degree in teaching,” Amanda said. “I will be an example to my brothers to not give up on life.”