Eleven years ago, the chairs and tables didn’t seem so small. Christian and Christopher slid easily, if not a little timidly, into them.

“I remember the first day we came to the Buckner Family Hope Center [at Wynnewood in Dallas],” Christopher reminisces with a smile. “I’m a pretty shy person, but everyone was so warm and inviting. I had a lot of fun that day.”

They came back the next day. And the day after that. And for roughly 3,000 days after that until the twin boys were 18.

“The Family Hope Center has grown me into the person I am right now,” Christopher said. “It’s matured me as a person. It’s helped me grow closer to God, including reading the Bible and praying. That’s a big deal because you can’t do anything without God. He’s always on your side.” 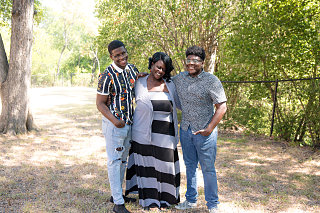 When Christie Young moved her family into the Wynnewood neighborhood of Dallas, she knew what they were getting into. She was raised in Dallas and had rarely left the city for any reason. She knew the struggles of the area. She gained even more intimate knowledge of it when a bullet flew through her daughter’s window and lodged itself into the ceiling.

Positive influences were mandatory if Christie’s boys were going to have the kind of life she wanted for them. But providing access to those opportunities was a struggle for a single mom with limited income.

“There’s a high crime rate here,” Christie said. “For people of color, you have little hope. I didn’t want my children to experience the street life, drugs, gangs. Buckner was a place of refuge.

“My boys were excited to come here. They’d really never been out of the home before. I really didn’t have money to take them all around Dallas. This place did. They met mayors. They went on field trips. They came here from when they were 7 all the way to freshman year of high school and then there were summer programs.”

Hour after hour of homework. Moment after moment of reading. Day after day of learning in and out of a classroom. Life lessons. Development of life skills. All of it led to Christian and Christopher becoming the people they are today: leaders.

“They were awesome,” said Cheryl Williams, director of the Family Hope Center. “They were children who would really listen to what you would say. That was crucial to them then and to them now. They would listen to adults they trusted and internalized what they heard.”

The path they started more than a decade ago took them to Texas Southern University, where they are sophomores. Christian wants to be a neurosurgeon – “the best neurosurgeon in the world.” Christopher is working to become a psychologist.  Their future is bright ahead.

“They were always sweet boys,” Christie said with a smile. “The program made them grow from boys to men. They didn’t have a father figure in their household. They are responsible now. Sometimes it’s hard to even put in words.”