Takiyah Outerbridge’s early morning alarm goes off, her feet hit the ground, and her first thought is, “Thank you, God, for my job.”

She walks her 12-year-old daughter Victory to her school bus stop and then walks across the street to catch her first bus of the day to get to work. She travels more than three hours by bus, train and another bus to get to her job as a dietitian at Buckner Parkway Place.

This journey is worth it for the place and career she’s fallen in love with. But it took prayer and determination to get here.

In 2017, Takiyah decided it was time to make a change. She packed up her and her then 8-year-old daughter’s belongings to leave her husband after years of struggles. She had her mind set on Arizona, but God had another plan.

“I was headed to Arizona only to hear from God, and he told me to come back to Houston,” she shared in a recent letter to Buckner.

Takiyah and Victory found shelter at New Hope Housing. Living across the street from the Buckner Family Hope Center™ at Reed Road, she became curious about what was offered there. 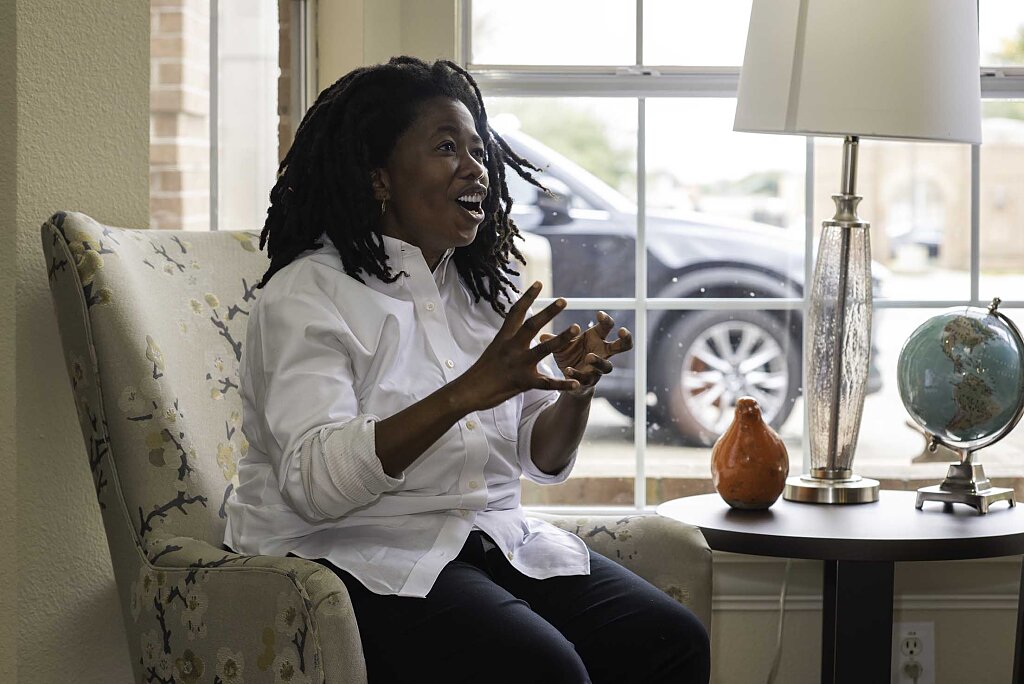 Takiyah didn’t waste any time to find out more and get Victory plugged into programming too. “I just fell in love with Buckner,” she said with a smile.

While living at New Hope Housing, Takiyah was working at Fiesta Mart, a local supermarket. She began as a cashier and then worked in the produce department. But the work environment was not healthy for her and caused a lot of stress. 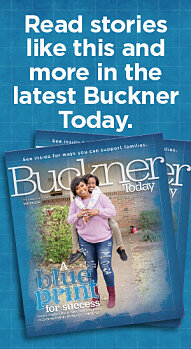 She would pray over and over, “God, you have to direct me. I have to get out.”

Takiyah leaned into prayer and into the relationships she had in her community, including the one with her case manager, Erin Mahaffey-Ratcliffe, community coordinator at the Family Hope Center.

“One day I was coming off the bus and Miss Erin said I needed to come in and fill out some paperwork,” Takiyah shared. “She tells me there’s a lady here doing interviews. I’m like, ‘interviews for what?’ And Erin says, ‘whatever you want.’”

When someone meets Takiyah, they are welcomed with joy, laughter and a big smile. This encounter was no different. They asked about her preference for working with people and handling meals. 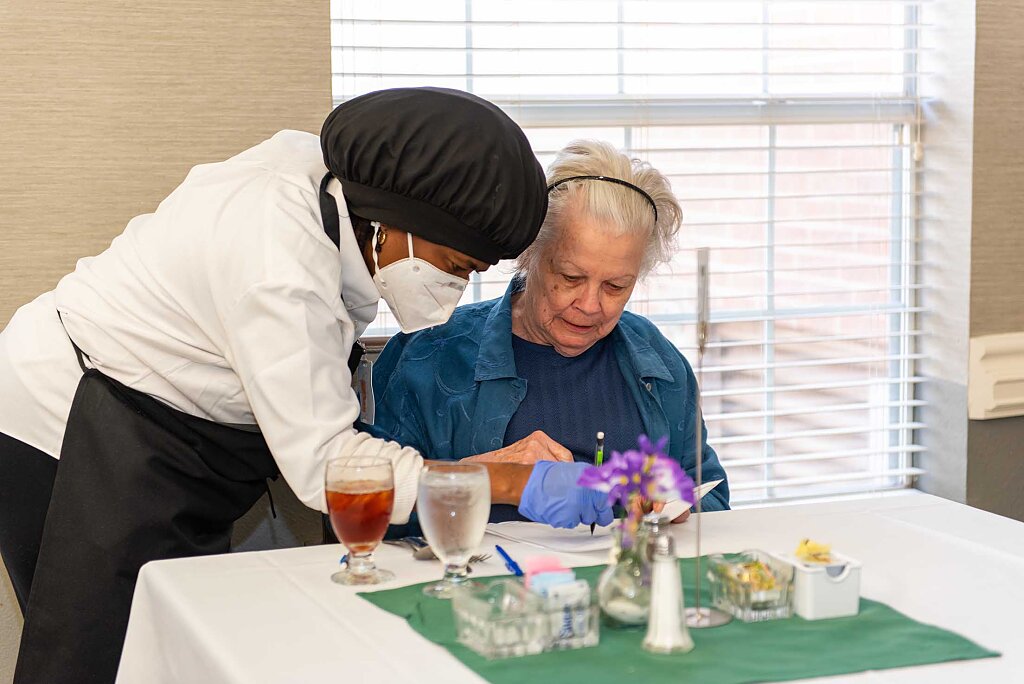 “People are my favorite – I love people,” Takiyah recounted from that interview. The role would be working with seniors and helping with their meals, both things she was passionate about.

But the position was nearly 25 miles away and Outerbridge doesn’t drive – especially on highways. So again, she prayed.

“I was applying for other jobs too,” she explained. “So, I had three options for a job. And I said, ‘God, give me a job that’s more to my personality. It has to be matched to my personality.’ And then Buckner called.”

Dedicated to serving seniors, the longer commute is worth it

When asked if it’s worth it? “Yes, it is, because I fell in love,” she said. “I love talking to the residents and my coworkers. And God’s spirit is here, and I feel it.” 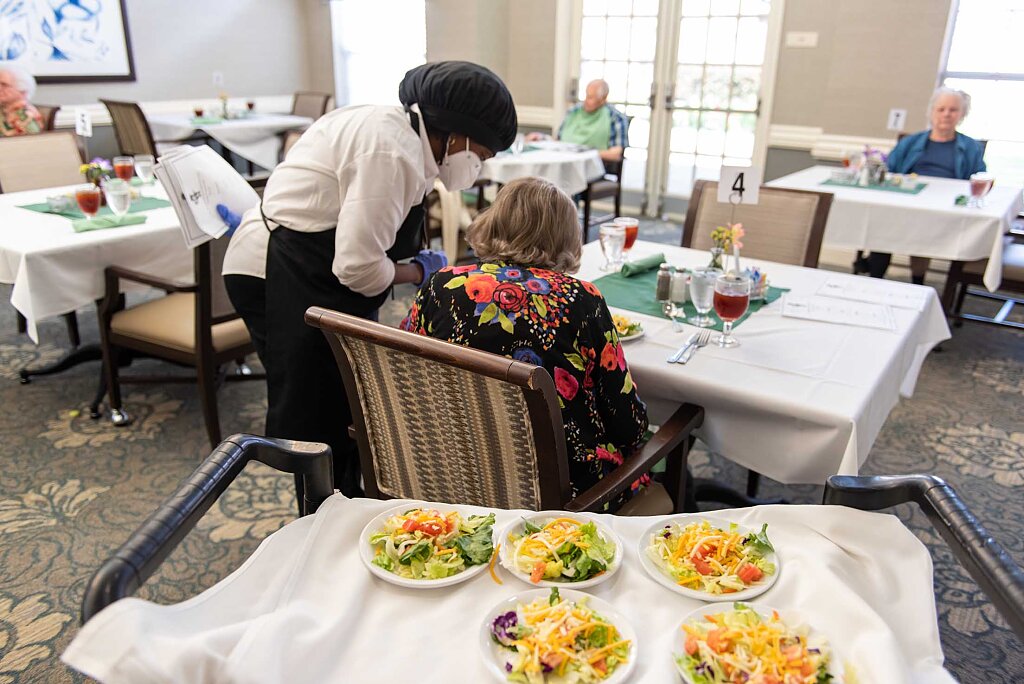 To receive services through the Family Hope Center, to becoming a Buckner employee, Takiyah can’t imagine being anywhere else. One of her goals is to be able to retire from Buckner.

“I feel like God has given me, for the first time in my life, true love with a job,” Takiyah said. “This is more than a job; this is more about fulfilling what God wants you to have in life. And that’s how I feel – like I finally did it at 42 years old.”

Her next hard decision is to move closer to Parkway Place and away from the comforts of being next door to the Family Hope Center. But just like all the times before, Takiyah knows God will provide. And she knows the community she’s found at both Buckner locations isn’t going anywhere.

Do you want to be part of the Buckner team? We have many positions available in a variety of fields. Discover how the difference is the purpose.

Takiyah Z Outerbridge says:
I love Buckner very much...Thank you God for this opportunity in Jesus name. The lady that wrote me was beautiful in the words. I was very thankful for it.