When the door to apartment 12 opens, I hardly recognize the woman behind it. She’s standing in the very same room we first met, but her hair is darker than I remember. Now it hangs just below her shoulders. She stands straighter, her shoulders back and her head high. She extends her hand firmly and welcomes me. With a smile. What a difference 12 months makes, the latest in a journey seven years in the making.

As a teenager, Marissa Breland struggled more than most. She’s bipolar and suffers from depression. That meant significant mood swings that created issues at home.

By her own account, she struggled with anger issues and alcohol. She dropped out of school at 15. Scars inflicted by her own hand still run up and down her left forearm.

One unhealthy lifestyle decision led to another, which led to a five-year unhealthy relationship. From it though came Addisyn, a blessing Marissa cherishes.

Marissa and Addisyn lived in a recreational vehicle on the edge of Longview. They shared a bed. The small water heater wasn’t adequate, forcing Marissa to boil water for her daughter to have a warm bath. It was a struggle.

“No one wants to raise their daughter in an RV,” Marissa said.

As she worked at the cash register of a gas station, Marissa fantasized of a different life. A better life – for her and Addy.

“I always dreamed of going to school and getting my [driver’s] license. But I didn’t see it happening any time soon. I’d been trying to do that for years, and it had been taking forever.

After visiting with Marissa for a while, there’s a knock at the door and Marissa opens it. But Addisyn is the first to greet the new guest, barreling into her knees with a squeal of delight.

It’s Tisha Grotemat, a parent educator through Buckner Project HOPES and Marissa's half-sister. She’s a rock star in Addisyn‘s eyes. She’s the fun aunt with a teenage daughter who treats Addisyn like a sister.

More than 15 years separate Tisha and Marissa. They share the same father, but truthfully they’d never been close. When Marissa was struggling through her teenage years, Tisha was faced with balancing a desire to help with a need to protect her children. Both sisters understand why the relationship was how it was. But they never stopped caring about each other.

Tisha saw the potential in Marissa and the need to help if possible. When Tisha became a parent educator, she thought Project HOPES would be ideal for Marissa and Addisyn.

Through the program, Tisha visits with Marissa and Addisyn bi-weekly to encourage healthy behavior and bonding between mother and daughter. They do activities that encouraged Addisyn’s development.

“I love Project HOPES. It’s been really fun for me and Addy. I’ve really enjoyed it,” Marissa said.

“My sister will come to my house and do activities,” Marissa
said. “It’s things that my daughter can make. It teaches her skills like listening to instructions. It’s stuff that’s fun. It’s stuff like painting and drawing. And we get to bond.”

“I’m extremely proud of her,” Tisha said. “With every semester, her confidence has grown step by step. I can’t imagine anything more satisfying than seeing your own sister be successful.”

Addy’s giggles bounce across the walls of the apartment as she makes shapes with her aunt and mom out of clay, her favorite activity to do during Project HOPES visits. She stops quickly and holds her creation up to me.

“It’s a flower,” she announces with pride. And before anyone can respond, she’s set it on the table and is carefully crafting something new.

As Marissa and Tisha visit happily at the dining table, 100 yards away Buckner Family Hope Center Family Coach Courtney Barr is engaged in a much more somber conversation with a single mom who is struggling and looking for help.

In the same chair Marissa once sat in.

Like a lot of the vulnerable families who enter Courtney's office, Marissa came full of potential. She was an amazing mother and a hard worker who was determined to have a better life. She’d already grown tremendously through Project HOPES.

But she was scared to take the next steps.

“There was a lot of fear,” Courtney said. “She wasn’t happy with how things were in her life. But she was afraid to move forward and afraid to take those steps because it can be scary. It can be scary to do something different and possibly fail at it.” 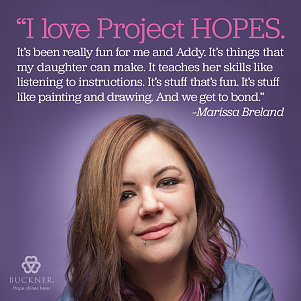 Marissa helped herself tremendously by knowing exactly what she wanted to do. She needed to learn how to drive, get her license and get a car. Then, she might be able to go to school.

Courtney outlined practical steps Marissa could take to reach each of those goals and then walked alongside her as she took them. In many ways, Courtney said, all Marissa needed was another positive voice encouraging her. When self-doubt crept in, Courtney and Marissa pushed it back out.

“My sister suggested family coaching with Courtney Barr because she felt like Courtney could help me meet a lot of the goals I had like getting my license, getting in school. I’d even thought about getting in counseling about some different things,” Marissa said. “I met with Courtney, and she helped me do everything I needed to get my license, take my class. She really helped me through everything. She laid out the steps. She pushed me through it.”

“She’s just a rock star,” Courtney said. “It was a really quick 180 with her. I think that’s what’s so remarkable about her. She had this amazing change in six months.”

Marissa enrolled in Jobs for Life, a twice-weekly Bible study and job skill development class through the Family Hope Center. There, she found her calling.

“Jobs for Life was huge for me,” Marissa said. “When I started taking that class, I was requesting off to take it twice a week. It’s basically a mini-Bible study about jobs. That’s what ultimately led me to want to go to school for social work.

“I always wanted to go to school, but I didn’t know what for. That class was so intense: Bible study twice a week and job training skills. It just opened so many doors. That’s where I found out about Buckner Family Pathways. It just became more of a reality that I could go to school.”

A stack of textbooks sits in the corner of the room. They’re both a sign of all the hard work Marissa's already put in and all the work to come.

Marissa's in-between semesters at Kilgore College in Longview, where she is working her way toward her associate degree. Although she was nervous heading into her first classes, she’s settled in nicely and thrived.

In the classroom. And in her home.

I first met Tisha and a quieter Marissa almost exactly a year ago in this very room as she moved into her Family Pathways apartment. She was speechless as she fought back tears and walked through her new home.

“It was really exciting and emotional when I moved in because my daughter had been living in a tiny crammed RV,” Marissa said. “When we moved into our apartment here, it was so big and so beautiful. It was like an opportunity. It was so much more real the day we moved in. It was like this is really happening.”

Kimberly Clough, director of the Family Pathways program in Longview, picked up where Courtney left off, encouraging Marissa along in her journey.

“Marissa was a single mom who had some struggles,” Kimberly said. “We’re here to make sure she succeeds.”

With Kimberly's help, Marissa continued making great strides. She enrolled in Kilgore College and figured out how to balance motherhood, school and working. Addisyn was accepted into an excellent preschool where she excels in the classroom like her mother.

“Buckner has a support system like none other,” Marissa said. “If I have trouble with school or I need counseling or I just need someone to talk to, Buckner has been that for me. They have helped me see a way out of where I was. They give me the opportunity to go to school so I can help people like I want to.”

Marissa is on the path to succeed far beyond what she once dreamed.

“At one point, I was somebody who really needed help,” she said. “I want to give that back. I want to pay that forward. I feel like that’s really important. Everybody needs help to a certain extent.”

As we wrap up the interview, Marissa turns reflective. Sitting next to a wooden carving that reads “blessed,” tears well up in her eyes as she thinks about the change that’s happened in her life in less than two years.

The transformation is visible.

“It means the world that they’d provide this opportunity for me,” Marissa said. “I’m not sure how I’d do it on my own. It’s a lot to have a 4 year old and going to work and going to school. Without Buckner, I don’t see me doing this.”

This summer, you can shine by participating in the Buckner Shine This Summer campaign along with a special $200,000 Matching Grant that doubles the value of each gift Buckner receives by Aug. 31. Every gift will be put to work to help single-parent families across Texas who are living in extreme poverty, fear and vulnerability — like Marissa was.

Should you feel led to make a special investment to be doubled by the Matching Grant, we’d be truly grateful. Any portion of the grant not matched will be lost, so we’re hoping for a strong outpouring of support to help mend more broken lives.