“While many people think of Buckner as the place where children go to live, we want to be known as the organization that helps children stay where they belong – with their own families, safe and protected,” said Buckner President and CEO Albert Reyes. “That is the ultimate goal of the Buckner Family Pathways and Family Hope Center programs.

“Buckner began working in Houston more than 60 years ago when we opened the Buckner Haven retirement community in 1955, now Parkway Place,” Reyes continued. “Then came our Family Hope Center at Aldine, and today, our footprint gets even bigger, as we celebrate the expansion of our work here at Reed Road in collaboration with Start of Hope Ministries and New Hope Housing. There is more to come for Buckner in Houston, so stay tuned.” 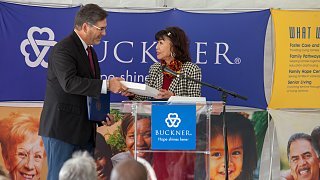 Congresswoman Jackson Lee and Alice Chen, the representative for Congressman Green, each unveiled flags flown over the U.S. Capital in honor of Buckner, as well as commendations. Additional commendations were sent by Senator Ted Cruz and Governor Greg Abbott.

The Buckner Family Hope Center of Houston at Reed Road is located on the Cornerstone Community campus, a collaborative nonprofit venture in partnership with Star of Hope, New Hope Housing and WorkFaith Connection. Representatives from all three nonprofits were at the ceremony.

Kartrel Jackson says:
I was wondering if your program is for the homeless or for everyone I am trying to get my ged and insteres in the cooking classes
Buckner Communications says:
Hi Kartrel! You can learn more about our programs in Houston and contact the Family Hope Center or Family Pathways to learn what requirements are needed to attend those programs at https://www.buckner.org/houston. --Buckner Communications