Transitioning into adulthood is hard. It means finding your own place to live, furnishing it, creating a plan to support yourself and executing as close to flawlessly as possible.

It’s even harder without any help. 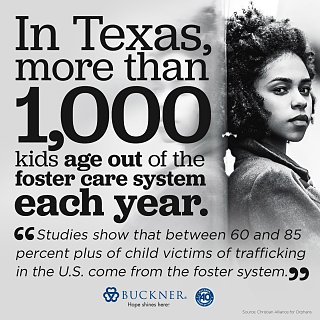 But that’s exactly the situation many of the 1,000 Texas children who age out of foster care each year face. They’re on their own to figure out their path, even as they’re still discovering who they are. As a result, research indicates many of them fall on tough times, including becoming homeless and victims of human trafficking.

Through programs like the FYi Center, Buckner provides a network of support for these young people, easing the transition into adulthood. Last week’s Hope Chest event in Lubbock is just one way Buckner helps these teens.

Thanks to sponsors like Buckner International, Texas Department of Family and Protective Services, Children's Home of Lubbock, Community Partners of Lubbock, Reclaimed 43 and Sondra's Song, eight students were treated to a morning of games followed by a shopping spree where Buckner staff and volunteers help them pick out items for their first apartments.

"When you moved out of your mom and dad's house and went to college or moved into your first apartment, you needed tons of stuff," said Bekah Coggins, transitional services supervisor for Buckner Children and Family Services in West Texas. "This is an opportunity to do that with these young youth, too."

The effort is part of a wraparound ministry provided by Buckner, which includes mentoring, connecting students with resources and creating a supportive network for young people as they grow older.

A day like this makes a significant difference. Rayne Badillo plans on attending Plainview College to study nursing.

"I never thought something like this would happen but it's actually helped me a lot," Badillo said.

For more information about Buckner ministries in Lubbock, click here.